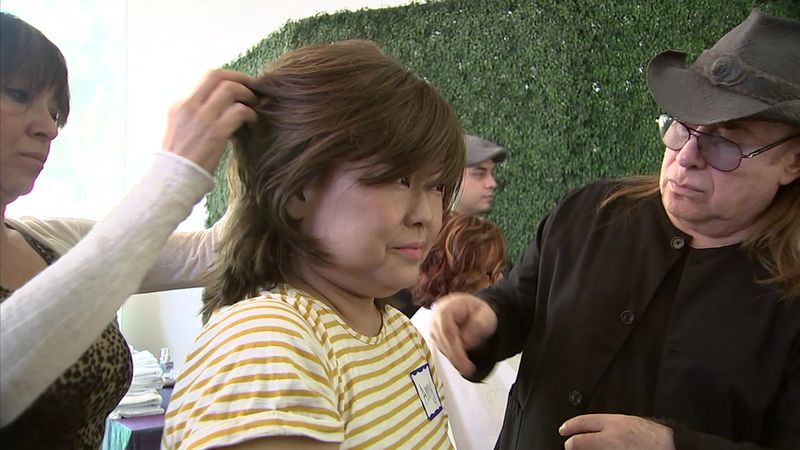 DUARTE, Calif. (KABC) -- When battling cancer, there's the struggle to find the right treatment. There's also the fight to recover not only physically but emotionally. That's why every year, City of Hope outfits its patients with something to lift their spirits.

Amy Bathke, 45, is about to undergo the next phase of her recovery.

Bathki had no idea what celebrity hairstylist Jose Eber and his team had in mind for her new look, but she was ready to take a leap.

"You never know when they're going to change your image and get something new," she said.

She played with a short and conservative looking wig, then she chose something longer and layered.

Bathke decided to be more daring and go for a wispy look.

"It doesn't even look like a wig," Eber said.

It's been 100 days since Bathke underwent a bone marrow transplant

"Rejuvenated, I guess, to go on with my life and everything after going through so much," Bathke said, holding back tears.

Even as she looks forward, it's hard not to look back at her struggle with acute myeloid leukemia.

Bathki and more than a hundred other City of Hope cancer patients were recently treated to wigs by actress Jaclyn Smith, donated by Paula Young.

Many can't afford the high cost of hair pieces. At the City of Hope event, the patients received customized styling that shaped the wigs to their faces.

"They walk in and they have tears in their eyes and they're sad. And then we put a wig on them. We play around with it and then they smile," Eber said.

After you've lost your hair, a wig can do more than make you feel good, it can also be a form of treatment. And some say in the battle against cancer, it can actually be a weapon.

"Looking good is very powerful because it does make you feel good," Eber said.

"It's very empowering to get a new hairstyle, of course, but especially if you don't have any hair," Bathke said.

It's another tool to add to Bathke's arsenal as she gets ready to take back her life.
Report a correction or typo
Related topics:
health & fitnessduartelos angeles countyhaircircle of healthhospitalcancer
Copyright © 2021 KABC-TV. All Rights Reserved.
CIRCLE OF HEALTH
What to know about the Epsilon variant and its risks
Without masks, even the fully-vaccinated can spread Delta variant
Pfizer, Moderna vaccines may offer protection for years, experts say
Largest pocket of unvaccinated: Young people, age 18-29
TOP STORIES
How do new CDC guidelines affect SoCal?
COVID hospitalizations in LA County hit highest level since mid-March
CDC reverses course on indoor masks in some parts of US
1 killed, 1 wounded in shooting at Corona movie theater
Ed Buck found guilty in West Hollywood meth overdose case
Walmart will cover 100% of college tuition for its workers
CSU to require all students, staff to get COVID-19 vaccine
Show More
Arrest made in fatal shooting of Rite Aid clerk in Eagle Rock
Tenants of Caltrans-owned homes in El Sereno upset with SB51
OC congresswoman introduces Kobe Bryant Day resolution
Bay Area teen attacked by crocodile while vacationing in Mexico
Video: Dog thrown from truck in West Hills crash
More TOP STORIES News