Health officials on Monday reported a sharp increase in COVID-19 outbreaks in the workplace in Los Angeles County.

Between March 15 and July 11, outbreaks in the workplace increased from less than 5 cases to more than 40.

Officials also confirmed 13 additional deaths and 2,593 new coronavirus cases, bringing the total number of fatalities to 3,822 and total cases to 136,129.

Nearly 2,100 people are hospitalized, with 26% in the ICU and 19% on ventilators. Officials noted the hospitalization rate "remains substantially higher than the 1,350 to 1,450 daily hospitalizations seen four weeks ago."

Los Angeles County officials confirmed 57 new deaths and 2,916 new COVID-19 cases. More than 2,000 people are currently hospitalized, with 27% in the ICU and 18% on ventilators. Officials noted the hospitalization rate "remains substantially higher than the 1,350 to 1,450 daily hospitalizations seen four weeks ago."

Testing results are available for over 1,313,000 individuals, with 9% of all people testing positive.

The facility on 59th Street was originally closed on June 27.

Inspectors say they found "flagrant" violations of safety protocols and the company refused to cooperate with what was then about 150 cases.

There has been no comment from L.A. Apparel yet.

The number of coronavirus hospitalizations in Los Angeles County continues to be of concern to public health officials as the numbers have steadily been increasing. Just over 2,030 people in the county are currently in the hospital after testing positive for the virus.

The county has seen a drop in testing, which officials say is partially due to testing site closures over Fourth of July weekend as well as increased demand.

"Up until even a week ago, there were thousands of unused slots that were available across the city and the county every week," said Dr. Christina Ghaly, the director of the L.A. County Department of Health Services, during a Wednesday press conference. "So there really was adequate testing. It's really only over the past one to two weeks where that mismatch of supply and demand has become increasingly apparent."

She added that it's very likely that testing access will "continue to be insufficient" in the days and weeks to come.

During a press briefing, county health director Dr. Barbara Ferrer was pressed about recent remarks from L.A. Mayor Eric Garcetti who warned the city could be placed under a second stay-at-home-order if the trend of rising cases continues.

Other figures that are of concern to health officials is the county's hospitalization rate. As of Wednesday, there were 2,037 people in the hospital with COVID-19. It's the second day in a row that the county reported over 2,000 hospitalizations.

Los Angeles County is changing its recommendation for who should get tested.

After the county reopened businesses and protests erupted over the death of George Floyd, officials encouraged everyone -- including people without symptoms -- to get tested.

But with both the number of cases and demand for testing going up, officials say it's time to change who gets priority.

"Tests should be prioritized for people who have symptoms, those who think they've been exposed, or are essential workers, or work in a high risk environment," L.A. Mayor Eric Garcetti said. "We are receiving reports people are getting tested so they can just go out, hang out with folks. That's not what these tests are for. A COVID test isn't an excuse to break the rules and engage in social gatherings outside your household. It's not an excuse to not wear a mask and not maintain social distancing. A test is not a passport to party.""

Testing appointments in the county are booked for the rest of the week.

The county plans to open 8 more testing sites to help.

The county health department reported 4,015 new cases of coronavirus on Tuesday, the largest single-day total since the start of the pandemic. But county officials said the high numbers are due to a backlog of about 2,000 cases received from a lab reporting results from an extended holiday weekend of July 2-5. The county is also reporting 46 new deaths.

Even accounting for the backlog, the county has been seeing an alarming rise in cases in the last week or two, believed to be linked to the reopening of businesses and activities. The county's long-term positivity rate for the testing of 1.2 million people has been 9%, but in the last seven days, the rate has risen to 11.6%.

The Los Angeles County Board of Supervisors have introduced an enforcement plan designed to take action against restaurants and businesses that are not in compliance with health protocols tied to reopening.

Businesses will be subject to fines for their first violations and could have their permits pulled for repeated offenses.

During the last weekend in June, county inspectors found nearly half of the bars and a third of restaurants were not following physical distancing protocols.

"If you're not in compliance, there will be a price to pay," said Supervisor Sheila Kuehl. "Because your failure to comply causes others to pay the price with their health. We will fine you if you are out of compliance. We will shut you down."

The county's totals now stands at 116,570 confirmed cases and 3,534 deaths, though officials noted that totals on Mondays are usually lower as some results from over the weekend are still being counted.

County health director Dr. Barbara Ferrer said the county is seeing an alarming rise in cases among the younger population. Almost half of the newer cases are among younger people, and that demographic is also seeing an increase in hospitalizations.

The largest testing site in the county, Dodger Stadium, was closed Monday as the nonprofit group which runs that site kept it closed for a long holiday weekend, but it is expected to reopen Tuesday. Hansen Dam was also closed on Monday. Other sites around the city and county remained open.

After a slight delay in updates, Los Angeles County officials are reporting the county's highest-ever single-day total of new coronavirus cases. The county reported 3,187 new cases on Friday, the first time the daily update has passed the 3,000 mark.

The county did not report numbers earlier on Thursday, Friday and Saturday as its data systems were being updated. The information for those days was reported Sunday: Over the three-day period, the county saw at least 7,232 cases, with some lab reports still to come in.

There were only 30 new deaths reported over that three-day period, a relatively low number compared to past reports, but county officials say that number is undercounted, with a number of reported deaths still pending verification.
Los Angeles County is now reporting a total of 115,013 COVID-19 cases and 3,485 deaths.

The numbers come out as the county is seeing an alarming spike in coronavirus hospitalizations.

At the same time, the number of COVID-19 patients in the ICU is up 35% in the last two weeks.

Health experts in Los Angeles County are asking the public to not indulge in traditional holiday activities.

"Please avoid interaction with others who are not within your household. These are small sacrifices for all of us to take in the interest of preventing further transmission," said Dr. Christina Ghaly, the director of L.A. County Health Services.
Appointments won't be available at city and county testing sites until Monday, but more people are being tested in California. Last week, the state ranked 17th in the country in testing and is currently ranked 14th.

Although Mayor Eric Garcetti said he plans to order in, restaurants throughout the county that offer outdoor seating will be open for business.

"Outdoor spaces, properly spaced are very safe. That's not the place you're probably going to get an infection. It's in a closed environment for more than 10 minutes. Six feet or less," Garcetti said.

Los Angeles County health officials say they will not be putting out daily coronavirus reports on Friday, Saturday or Sunday because the county is updating its data processing systems.

Los Angeles County officials on Wednesday confirmed an additional 35 deaths and 2,002 COVID-19 cases, making it the fourth day in a row that the county has reported over 2,000 new cases in one day.

The county's totals now stands at 105,507 confirmed cases and 3,402 deaths, though officials noted that Wednesday's numbers do not account for lab results from one of the larger testing labs.

Several counties in California, including Los Angeles, have seen a surge in cases in recent weeks, prompting Gov. Gavin Newsom to order the closure of bars.
Last week, L.A. County health officials projected that one in 400 individuals were infected with COVID-19 and not isolated. Today, that estimate is at 1 in 140 - marking a threefold increase, it was announced at the briefing.

Officials said Los Angeles County bars must close following an order Gov. Gavin Newsom issued on Sunday in response to a sharp increase in COVID-19 cases across the state.

The County Health Officer Order will be amended on Sunday to require that all bars, breweries, brew pubs, pubs, wineries and tasting rooms in the county close "unless they are offering sit-down dine-in meals. This includes closing bar areas in restaurants," according to a news release.

The Los Angeles County Department of Public Health reported "significant increases in COVID-19 cases, hospitalizations and the testing positivity rate." The 7-day average of new cases was over 1,900; the average two weeks ago was 1,379 cases.

The coronavirus testing site at Dodger Stadium continued to see long lines and long wait times on Friday at the end of a week in which California set record numbers of daily COVID-19 cases.

Test results through CVS will take about three days to process, officials said.

No COVID-19 testing appointments will be available until this weekend in the city and county of Los Angeles.
Two of the reasons for the testing shortage are a change in vendors and the city is updating its registration platform. L.A. has stopped accepting appointments at city-operated sites as it works to make those changes. Meanwhile, the county is experiencing high demand.

The city says it is working on adding new appointments, and on Monday, June 29, L.A. County will open more than a dozen new testing sites.

California reported more than 5,000 new coronavirus cases in its daily update Tuesday, the highest number reported in a single day since the pandemic began, according to The Associated Press. The state reported a total of 183,073 confirmed cases to date. There have been almost 3.5 million tests conducted in California.

The increase is coming as the state continues to allow more businesses to reopen.

Overall there have been 5,550 fatalities in the state, a one-day increase of 65 deaths.

Anyone trying to register online for free COVID-19 testing in Los Angeles city and county may be having difficulty making an appointment, officials said Tuesday.

As of Tuesday afternoon, the system was showing that all available appointments were taken.

This is due to at least two reasons:

1. The city of Los Angeles is temporarily not allowing appointments past Wednesday, June 24 as the city moves to a new vendor and registration platform. The city has also been paring down its testing sites and available slots.

2. The county's testing sites outside the city are full through the end of the week. Later on Tuesday, the county expects to make appointment slots available for this coming weekend. The county is also planning to open additional testing sites next week. 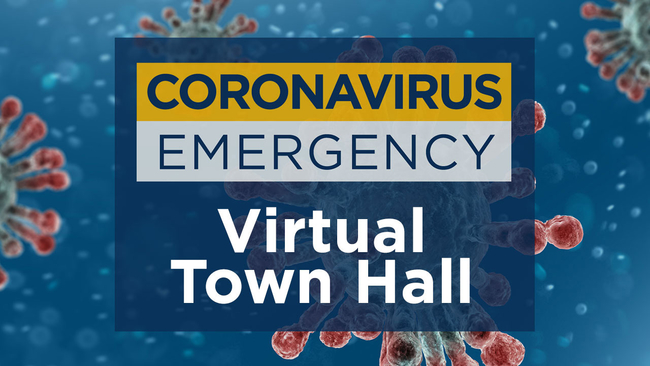 Coronavirus: Here are answers to most common questions 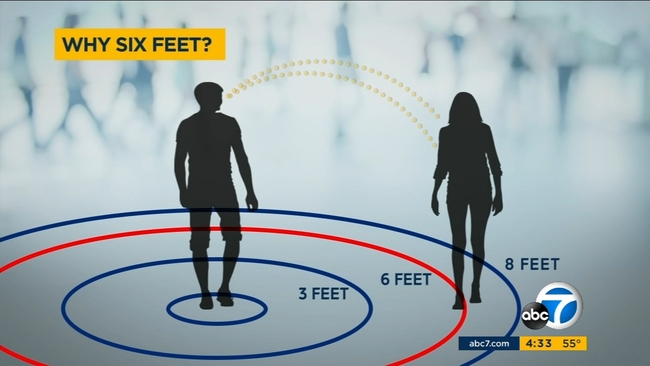 Why 6 feet? The science of social distancing 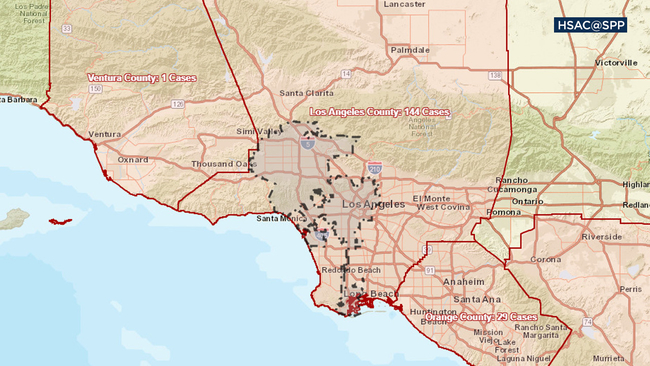 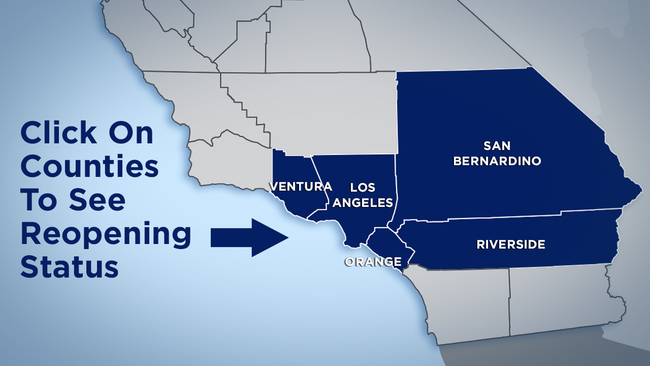