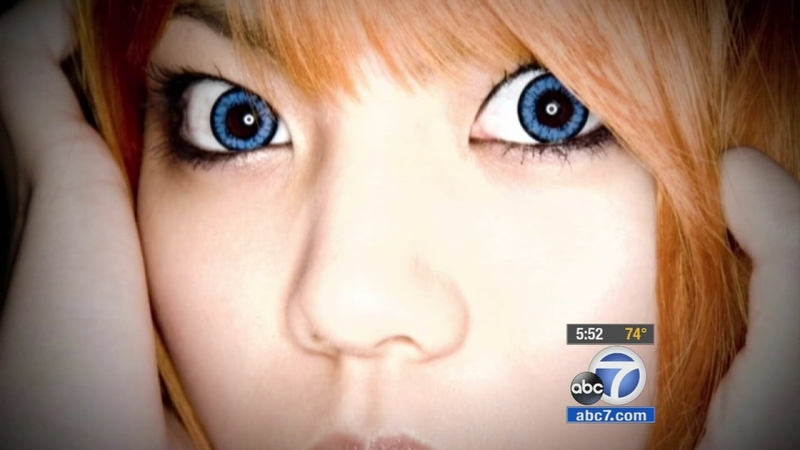 LOS ANGELES (KABC) -- Colored contacts were supposed to be part of a fun Halloween costume for 17-year-old Leah Carpenter and her powderpuff team. All were dressing as zombies with creepy contact lenses.

"I wish I wouldn't have done it to be honest with you," she says.

The next day, Leah experienced her own personal nightmare.

Dawn Carpenter says he daughter's eye was swollen and red.

"I asked her, 'Did she have pink eye or something?'" Carpenter said.

The infection made Leah partially blind.

The U.S. Attorney's Office is charging 10 California sellers of lenses, saying it can be a serious danger to unsuspecting Halloween shoppers.

"They may be widely available through the Internet, but even though they are available [it] doesn't mean that the lenses themselves are FDA approved," one doctor said.

Other concerns include Halloween makeup. The Campaign for Safe Cosmetics tested 10 of the most popular face paint brands and some contained lead and six had traces of other metals considered toxic.

"Many of my patients have come to me with red, irritated, inflamed skin, and I've even seen somebody come in with severe blistering," dermatologist Dr. Whitney Bowe said.

But trauma surgeons at Children's Hospital Los Angeles have even more basic concerns.

Dr. Jeffrey Upperman says the number of children being hit by cars peaks on Halloween.

"Kids are in masks. They can't see very well and some of them don't wear reflective costumes, and so they're easy targets for cars who are not recognizing them," he said.

His advice is to stick with Halloween gatherings in places where there's no traffic. But if you want to hit the streets, Upperman advises choosing this as a time to be with your kids.

"Walk with them no matter how old they are and spend some time with them out on the street," Upperman said.