Santa Clara County's top public health official says she understands the economic and other frustrations residents are feeling throughout the prolonged shelter-in-place orders, but urges caution as the state reopens.
KGO
By Alix Martichoux
SANTA CLARA COUNTY, Calif. -- Santa Clara County's top public health official, Dr. Sara Cody, has a reputation for taking things slow. While the majority of California has moved into Phase 3 of reopening amid the coronavirus pandemic, Santa Clara is one of 11 counties still lagging behind.

That means no hair salons, barbershops, churches, or in-store retailers have reopened in the county, and probably won't in the coming days.

"The pace at which the state has made these modifications is concerning to me," said Cody in a virtual Board of Supervisors meeting Tuesday. "We can't see the effects of any of these changes ... for at least 14 days of an incubation period. And 21 days is even better."

That incubation period is the key reason the Bay Area county is holding off on further reopening, Cody explained in a press conference Wednesday. If the county makes a modification, such as allowing for curbside retail pickup to resume, health officials are waiting a full two weeks to make sure we don't see a spike in new infections. If two weeks passes and case rates are stable, the county will gradually ease restrictions a bit more.

But the state isn't following that wait-and-see approach. Every week or so, Gov. Gavin Newsom has announced the reopening of new industries.

When will gyms reopen in California? Newsom says guidelines on fitness centers are coming in a 'week or so'
EMBED More News Videos

"The state modifications are being made without a real understanding of the consequences of what the last move has been," Cody said Tuesday.

"Yesterday's actions were particularly concerning," Cody said of the state's decision to allow for places of worship to resume in-person meetings at 25% capacity or with a maximum of 100 people, whichever number is smaller. That change hasn't taken effect in Santa Clara County (or much of the Bay Area), since there are stricter local guidelines in effect.

Cody said the modification to allow for somewhat large religious gatherings is particularly risky, as one infected person could rapidly infect other congregants and prompt a new outbreak.

"COVID very much behaves like a fire in fire season. We have dry tinder everywhere and we do not want to have a large fire again," she said Wednesday. "We know that we are going to have little spot fires. ... But what we don't want is a fire burning out of control that we can't see. So that's why we're going to move slowly.

She adds, "If we don't pause to see the impact, we're blind."

Cody said she understands the economic and other frustrations Santa Clara County residents are feeling throughout the prolonged shelter-in-place orders.

"I live in this community. I too am exhausted. My family is tired of being at home. My kids are tired of being at home. We're all tired," she said. "I think what we're trying to do in our community is trying to find a path forward that is least harmful, that is most health protective. And it's a very difficult course to chart. We're doing our very, very, very best in a really, really tough time." Watch list: 26 CA counties where COVID-19 is getting worse 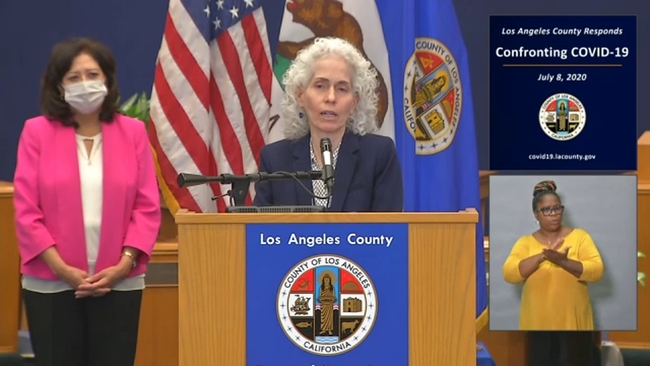