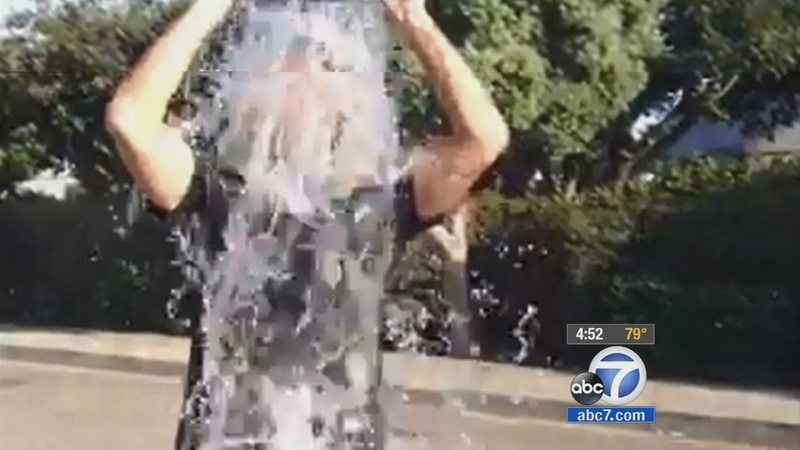 LOS ANGELES (KABC) -- Videos of people dumping ice water over their heads are all over social media. Now the fundraising dollars are pouring in as well.

In the same period this year, they've raised $1.35 million. And that figure doesn't even include revenue that has gone directly to chapters across the country.

"It's an unprecedented amount of money for us to raise in what is really less than two weeks," said Fred Fisher, president and CEO of the ALS Association Golden West Chapter.

"The thing the ALS community has starved for is attention and awareness and it's so gratifying to see people stepping up in such a public way," said Fisher.

Frates encouraged his friends and family members to post videos where they dump ice on their heads. Frates said if you dump the ice, you can then challenge someone else to post a video. If they don't accept the video within 24 hours, they are supposed to donate to the ALS Association.

"It's something people can do," said Fisher. "The hardest thing about ALS is answering the question, 'What can I do?'"

Celebrities including Denis Leary, Elizabeth Banks, Lance Bass and Dierks Bentley have all accepted the challenge.

Sports teams, including the USC football squad, have posted videos.

Ethel Kennedy even challenged President Obama after pouring water on her head.

In addition to the funds, Fisher is excited that the videos are educating people about the disease.

"Two to five years is the average for someone diagnosed with ALS," said Fisher. "It robs a person of their ability to move, to speak, to swallow, and eventually to breathe. And there are no known treatments and no cure for ALS. So raising awareness and raising dollars is essential for our cause."

Michelle and Daniel Rozzen experienced ALS firsthand. Ten years ago they lost their father David to the disease. David was a longtime engineer at ABC7.

"My dad did not deserve to get the disease -- no one does," said Daniel Rozzen.

But the Rozzens say the videos are providing hope.

"It's really remarkable how much money can be raised just dumping a bucket of water over your head," said Michelle. "A video -- how hard is that? It takes a minute of your day."

They also are asking for people to attend the Walks to Defeat ALS in Southern California: