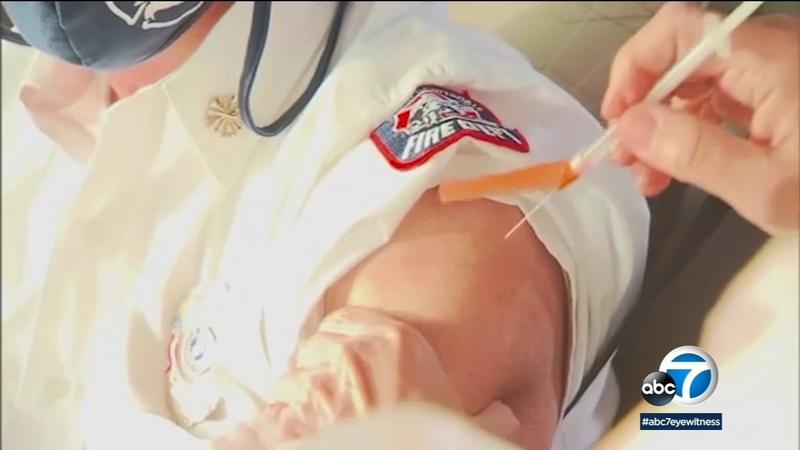 "It is hard to manage a vaccination program with so much variability in the weekly allocation," L.A. County Public Health Dr. Barbara Ferrer said, pointing to unpredictable amounts of vaccine being distributed by the state.

In the first week of January, the county received more than 130,000 doses. A week later that number increased to almost 200,000 doses. Then two weeks after that, it went back down to around 130,000 doses.

Amid a COVID-19 vaccine shortage, Los Angeles County-run vaccination sites will only be administering second doses starting Tuesday and lasting through the end of the week.

The news comes amid a continuing overall shortage of vaccine supply. The limited availability of doses will restrict the county's five large-scale vaccination sites for the rest of this week to administer solely second doses to people who have already had the first shot.

That means people still looking for their first inoculation will find it difficult to find an appointment, although some will be available at select other vaccine locations.

County officials said they hope to see rising weekly allocations of vaccine so more shots can be made available for those looking to get their first dose.

Ferrer also said the county has also confirmed a fifth case of the coronavirus variant first detected in the United Kingdom. That variant is not considered more dangerous or deadly, but it is transmitted much more easily.

The county is continuing to see a drop in case numbers, with just 2,741 new infections reported Monday, although early week figures tend to be artificially low due to weekend reporting lags. Those new infections lifted the countywide case numbers since the pandemic began nearly a year ago to 1,149,064.

Gov. Gavin Newsom on Monday acknowledged the state is also not getting enough supply.

"We are sober and mindful of the scarcity that is the number of available vaccines available in the United States of America," Newsom said. "Nonetheless, we are not naive about our responsibility here in the state of California to move these vaccines out of the freezers and into people's arms.

Newsom says statewide, the vaccination rate has rapidly increased since January. So far, about 4.7 million doses have been administered, according to the state's website. That's about 35 million shy of the state's population.

The Centers for Disease Control and Prevention says about 12% of people in California over the age of 16 has gotten the first dose.