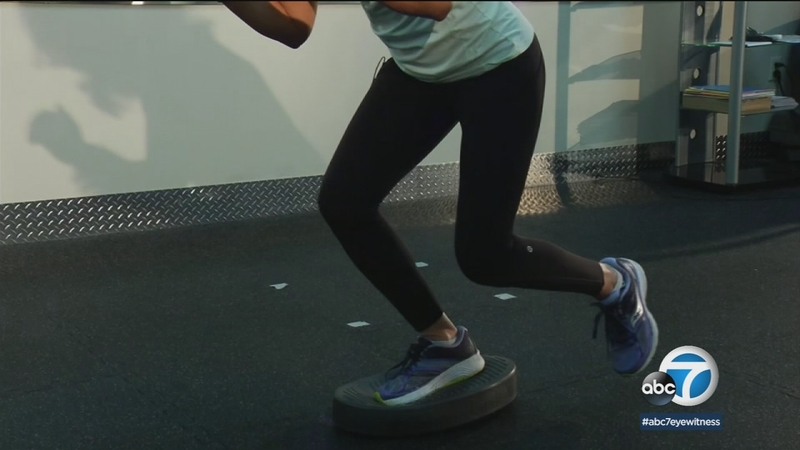 KING OF PRUSSIA, Pa. (KABC) -- There are about 250,000 ACL injuries every year, but they seem to hit two groups especially hard.

Doctors see those types of knee injuries in young people under 20 and active adults over 40. Now, a physical therapist has developed a program and app that's designed specifically to prevent ACL injuries for people of all ages.

Kay Acton is one of those active adults. The 56-year-old avid runner is also a skier, hiker and cyclist.

But a 2017 ski accident forced her into a timeout that hurt in more ways than one.

"My legs were a little tired and it was a little icy and I fell as I was going down," Acton said. "My left ski released, my right ski did not and immediately I felt the tear."

Acton had torn her ACL.

Trent Nessler is a physical therapist and treats a lot of people who find themselves in the same situation Acton did.

"When an athlete is fatigued, they are more likely to get injured," Nessler said.

That's why he designed the ACL "Play It Safe" program.

It takes several approaches, including pre- and post-exercise routines, resistance bands and a rubber stability trainer. It also forces people to train when they're already tired.

Researches have specifically selected the exercises in the Play It Safe Program, putting them together in a sequence to allow progression from poor movement to highly skilled movement.

The results are a lower risk of re-injury and a significant impact on athletic performance.

An Australian study confirmed that soccer players who trained in a fatigued state suffered fewer hamstring injuries than the players who were non-fatigued.

"What we found is that if we trained them in that fatigued state, they actually carry that over better to their actual performance on the field," Nessler said.

After surgery, Acton took part in the program and is now back on the slopes. She had a faster recovery time than her identical twin sister who tore her ACL just four days before Kay did.

"This program again was more aggressive and also gave me more ammunition to take with me when I do my other activities," Acton said. "I'm really proud of where I am now."