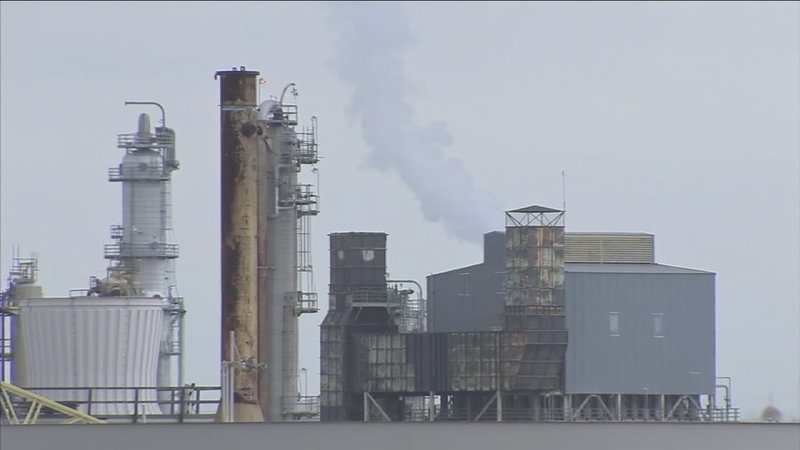 About 100,000 Torrance residents received public safety warning fliers this week from a neighborhood grassroots volunteer group that fears a serious threat to the community lies within the walls of the Torrance Refinery.

"If that thing blew up right now and the hydrofluoric acid leaked, we could not get away from it quick enough," Steve Goldsmith said.

Goldsmith is with the Torrance Refinery Action Alliance. The group is worried about modified hydrofluoric acid, a toxic substance used at the refinery that can cause severe burns, long-lasting internal organ damage, and even death.

"We really want to get that substance out of our community. It's so dangerous," Cathy Clay said.

Clay, another volunteer, said they became aware and concerned about the acid after the 2015 explosion at the refinery.

"A big piece of debris almost hit a big tank that contained hydrofluoric acid," she said.

The refinery confirmed it uses modified hydrofluoric acid in their alkylation units to make the gasoline we put in our vehicles. They said they have safety measures in place to contain MHF if it were to leak. It has also operated with the acid for 51 years and never had an off-site release.

"Bottom line is that if they can be a good neighbor and they can make modifications that can help our well-being, then they should," resident Hilda Colclasure said.

Refinery representatives said the process of eliminating MHF would take several years to complete, cost more than $600 million and threaten the viability of the plant, which employs 600 people and produces 20 percent of the gasoline used in Southern California.

Goldsmith and Clay aren't buying that explanation. They are determined to get the MHF banned and said the Air Quality Management District is investigating the issue. They are encouraging residents to speak out if they're concerned.

"'David' - the community - can defeat this 'Goliath' of the oil industry," Goldsmith said.