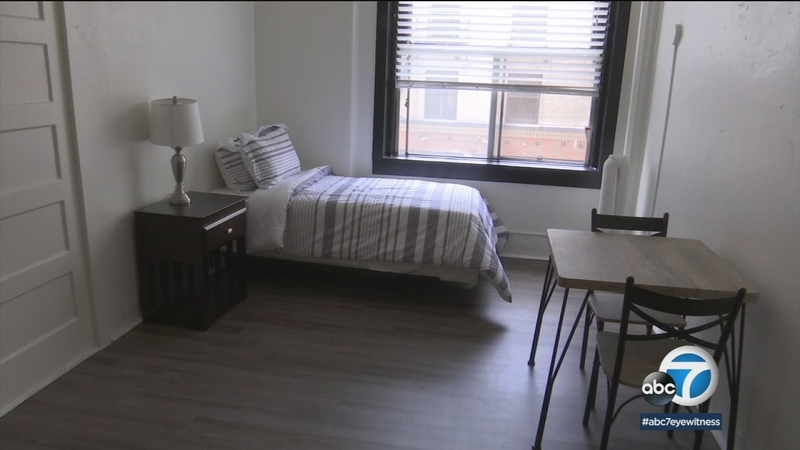 LOS ANGELES (KABC) -- Frankie Delatorre was homeless after his Hollywood landlord raised rent so much that he was forced to sleep on friends' couches, and eventually, he ended up on the street.

But thanks to the Healthy Housing Foundation part of the AIDS Healthcare Foundation, he's been in an apartment for three months.

Delatorre, who has been HIV positive for 35 years, is on social security which helps pay the $400 a month in rent to live at the Madison Hotel. It's around the corner from Skid Row, but a world away.

"Because of this building that was put here, it cleaned up the neighborhood, and we're still cleaning up in here," Delatorre said.

The Healthy Housing Foundation is targeting old hotels in the city like the King Edward which they've found are under-occupied. The nonprofit buys the property, refurbishes the rooms and lowers the rent.

The 150-unit King Edward Hotel was bought only one week ago, but some rooms have already been flipped. It's the third property the nonprofit has acquired in the last six months to be used for transitional and long-term housing for the homeless.

"Each of the hotel rooms will have newly renovated flooring, the plumbing, the electricity. We want to make it safe, healthy, if there's insect problems, we're going to get rid of those. In the lobby, we will have representatives from organizations who will help people with jobs, housing, testing," said Samantha Granberry, executive director of the Healthy Housing Foundation.