Healthy Seas estimates about 640,000 tons of fishing gear is either lost or abandoned in the water each year.
KABC
By Jaysha Patel 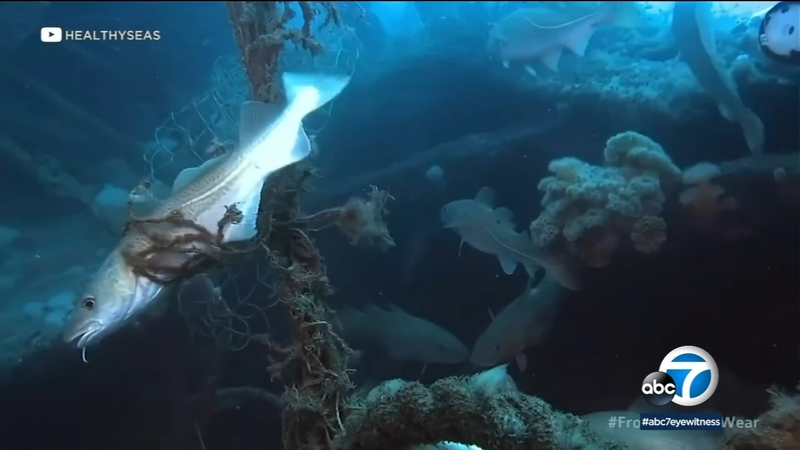 SAN PEDRO, Calif. (KABC) -- Healthy Seas, a nonprofit that works to remove waste from the seas, recently teamed up with divers who can remove lost fishing gear and other debris to clean up a location where a pre-World War II destroyer was sunk for a movie called "Hell Below."

"When it was time to cut the net, the net was actually much bigger than what we anticipated because some of it is hidden underneath the wreck, or underneath the sand, so we start pulling and it's more and more," said Karim Hamza, who works for Ghost Diving USA.

Healthy Seas estimates about 640,000 tons of fishing gear is either lost or abandoned in the water each year.

"Every year, we lose thousands and thousands of pounds of nets, and those nets are made of plastic and nylons, so they will have a life expectancy of 45 years to as much as 600 years," said Hamza.

That plastic isn't biodegradable, which can release micro plastics.

This is often called "ghost fishing" because nets appear invisible in the water and marine life can get trapped.

"In the state of Washington, because it's an estuary, they don't have an open coastline like we do here," said Hamza. "What will happen is the fisherman will have 24 hours to report the missing nets. We don't have that in California."

The good news is these nets won't be going to waste.

They will be turned into products such as socks and swimwear.