Family members say Fatima Johnson's murder is a huge loss for the community, which she always tried to help in any way she could.
KABC 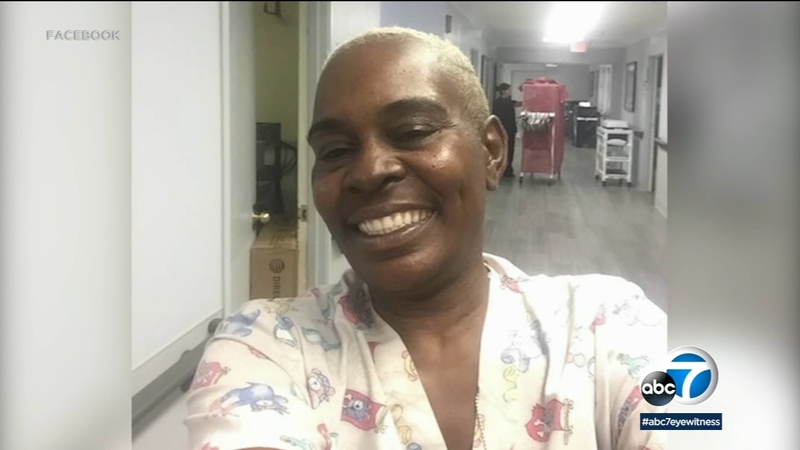 SOUTH LOS ANGELES (KABC) -- The family of a 53-year-old woman who was found dead, with tape over her mouth and her hands bound inside her home in South Los Angeles over the weekend is pleading for answers, with authorities saying they have not identified a suspect. The victim's boyfriend has been named a person of interest.

Fatima Johnson was found inside her home in the 7600 block of South Western Avenue by her daughters just after midnight Sunday after she didn't show up for work and didn't respond to text messages.

According to a Los Angeles Police Department spokesperson, officers responded to the location a short time later, and she was pronounced dead at the scene by Los Angeles firefighter-paramedics.

Family members told Eyewitness News that Johnson's hands were bound and she was wrapped in a blanket. The gruesome discovery comes just over a week before Johnson's 54th birthday.

There were no other obvious signs of trauma, the LAPD said.

"The scene that my sisters and I...witnessed first-hand and what happened to my mother is something that no child should ever see of their parent," said daughter Tyesha Harvey.

"He was just released from prison six months ago after completing a 25-year sentence for murder," Harvey said. "We took it upon ourselves to start popping up on my mother and checking in on her to make sure she was all right because we didn't feel comfortable with her relationship."

Investigators say they are looking at the boyfriend as a person of interest but say the investigation is still early. The suspect, identified only as a male, fled the scene in an unknown direction, police said, adding that the incident is not believed to be gang-related.

"To the man that murdered my momma, I talked to you this morning. I want you to make your statement. I want you to turn yourself in," said daughter Kamia Jones.

Harvey adds her mother's murder is a huge loss for the community, which she always tried to help - whether it was feeding the neighborhood kids or helping someone with gas money. Her family hopes her killer will soon be behind bars.

Dozens gathered for a candlelight vigil that was held in Johnson's honor Monday outside her home, Ali said. A growing memorial of candles and flowers now sits outside her door.

A GoFundMe page has been set up to help the family with the cost of funeral services.

Johnson's death comes amid a rise in killings in L.A., according to an L.A. Times report. Between July 2 and July 5, the LAPD reportedly recorded a dozen deaths, and the L.A. County Sheriff's Department recorded at least another four.