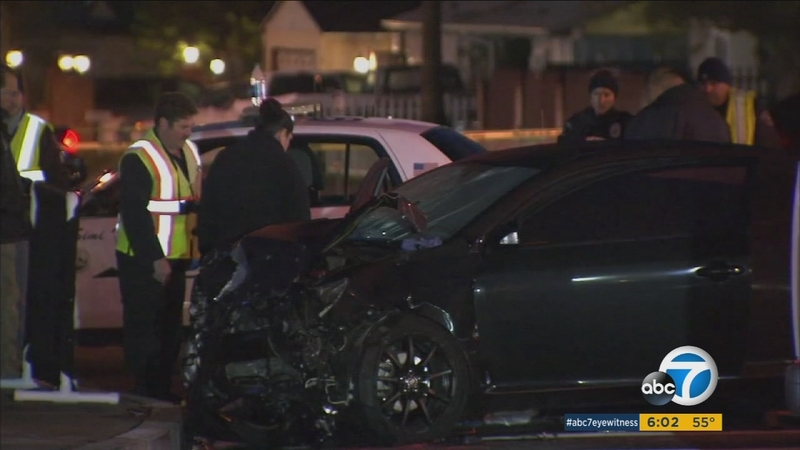 The Simi Valley Police Department identified the deceased passenger as Officer Heather Monroe, 30, of the LAPD. She was wearing a seatbelt at the time of impact, according to investigators.

"She was nice and she didn't take her authority in a wrong way. She was a really good person and I'm so sorry that this happened to her," Monroe's friend Serena Devries said.

The incident occurred shortly after 2 a.m. at the intersection of Sycamore Drive and Cochran Street, a police spokesperson said.

Monroe and a driver were in one vehicle; an Uber driver and passenger were in the other. Both drivers and the Uber passenger were transported to a hospital with injuries that were not life-threatening.

"Although the exact cause of the collision is still being determined, it appears that one of the vehicles failed to stop at a red light," Simi Valley police said in an afternoon news release.

It was unclear if the crash was captured on surveillance video.

"It's a terrible way to start the New Year," said Simi Valley police Deputy Chief Joseph May. "It's a sad day for Los Angeles Police Department and for law enforcement to lose one, whether its on duty or off."

"But we just need to be careful and watch out when we're driving," May added.

Josh Rubenstein, public information officer for LAPD, released a statement which read in part, "Losing an officer is devastating, but the pain is intensified for the men and women of the department when it happens during what is supposed to be the happiest time of the year."

Both drivers were being tested to determine whether drugs or alcohol played a role in the incident, authorities said.

The intersection was reopened after several hours following an investigation at the scene.