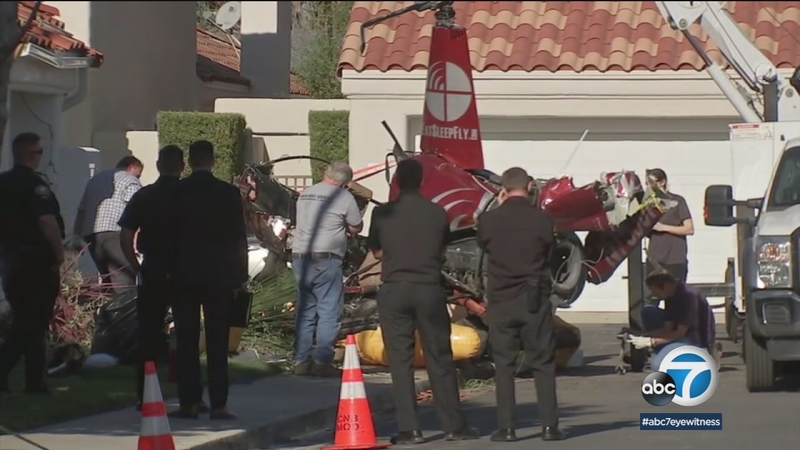 Joseph Anthony Tena, 60, of Newport Beach and Kimberly Lynne Watzman, 45, of Santa Monica were named as two of the victims who died in the Tuesday crash, according to the Orange County Sheriff's Department.

The third victim was identified as 56-year-old Brian R. Reichelt of Hollywood, Florida.

Watzman was general manager of the Standard Hotel in West Hollywood, according to a friend.

Kim Watzman, 45, of Santa Monica, was one of three people killed in the Newport Beach helicopter crash. She was general manager of the Standard Hotel in West Hollywood.

The incident was reported around 1:45 p.m. at Egret Court and Shearwater Place in the Bay View Terrace community. The aircraft struck three homes, including the yard and wall of a home. A piece of the tail rotor was seen lodged in the tiled roof of a home across the street.

Newport Beach police said there were four people on the Robinson R44 light helicopter and one on the ground who was also apparently struck by some debris from the crash.

Those killed were the pilot and two passengers, and a third passenger survived, according to the National Transportation Safety Board and Federal Aviation Administration who spoke at a morning press conference. The fifth victim, described as a house painter, was treated and released with minor injuries.


A woman was home at the time, but was in the kitchen and did not suffer any injuries.

The helicopter is based out of John Wayne Airport in Santa Ana, which is only about a mile from the crash site, and was headed for Catalina Island.

The helicopter's manufacturer, Robinson Helicopter Co. is based in Torrance. The operator is Santa Ana-based Revolution Aviation. Revolution Aviation is known for providing scenic tours, and it teamed up with Canyon High School to teach students about aviation and possible careers.

NTSB officials confirmed the flight was personal and not an instructing or sightseeing flight.

Witness accounts and skid marks and debris indicate the aircraft's rotor may have first struck the roof of the other house as it was coming down, then hit the ground and skidded into the front wall of the home.

One neighbor said she heard the blades of the helicopter slow before the impact.

"At the end, when I think about it, you can hear the propellers slowing down," said Paddi Faubion.

NTSB officials were continuing to investigate the cause of the crash. No distress call was transmitted from the aircraft prior to the crash. Investigators said they're hoping a surveillance camera from the final home that was hit can shed more light on the cause of the fatal crash.