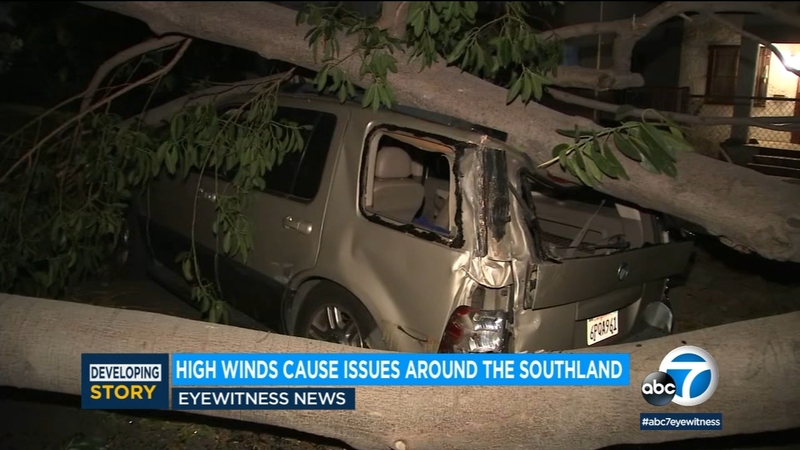 Cleanup underway after high winds cause damage across SoCal

SOUTH LOS ANGELES (KABC) -- Though the winds that whipped through Southern California mostly died down by Tuesday morning, efforts were underway to clean up the damage and mess left behind by the gusts.

The high winds toppled large trees from South Los Angeles to Van Nuys and also knocked out power to some neighborhoods.

Residents in one South L.A. neighborhood, where massive trees fell over onto several parked cars and completely blocked the street, said they've been complaining about those trees for several years because they looked old and were worried they would eventually cause damage like they did overnight.

Those trees seemed to have missed hitting any homes by inches.

"Just moved in two weeks ago and now we have a tree in the front yard. We're not sure if it really hurt the house, but the whole front yard is destroyed," said Derek Love.

Jesse Atkins III said he and his neighbors came out to survey the damage when another tree that caused concern among residents collapsed right before their eyes. No injuries were reported.

A dust storm swept through Lancaster Monday and prompted road closures as visibility was reduced to nearly nothing.

On Monday, a dust storm that swept through the Lancaster area prompted the temporary closure of Route 138, as well as a section of the 14 Freeway.

Visibility in the Antelope Valley area was reduced to nearly nothing - all residents could see is thick, dusty haze.