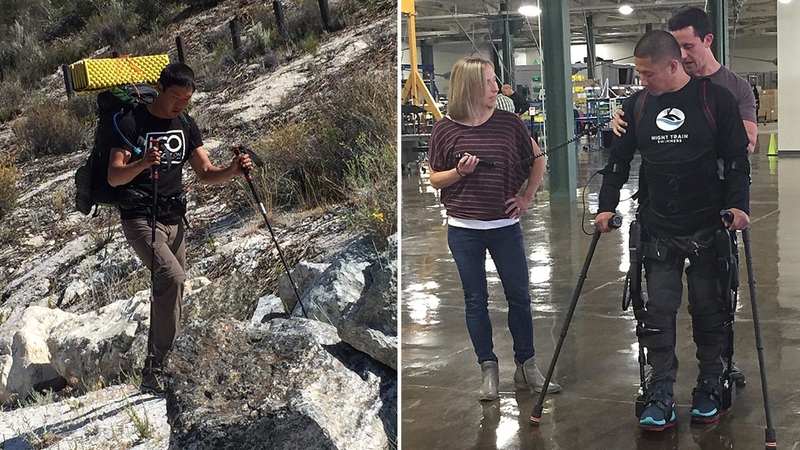 ACTON, Calif. (KABC) -- Eugene Yoon is hiking the entire state of California to try and help another man walk.

"I have loved every single step of this journey!" he said.

About a year ago, Yoon decided he wanted to pay it forward with his life in some way. Then, he spotted Arthur Renowitzky on social media.

Renowitzky frequently posts pictures of his rehabilitation from a paralyzing gunshot wound.

After being shot during a robbery in 2007, Renowitzky founded the Life Goes on Foundation. Renowitzky now speaks to kids around the country about non-violence and spinal cord injuries.

"My message is simple: to keep pushing, life goes on and to never give up," Renowitzky said.

Yoon was so moved by Renowitzky's message, he sent him a Facebook message.

"I reached out to him blindly and told him, 'I'd like for you to achieve your dream of walking again.' So, I pitched him this outlandish idea of walking the state of California to help him walk again!" Yoon said.

"It's just amazing he's wanting to do this hike," Renowitzky said. "I don't know one person who would do this for me!"

Yoon trained for months and then began the more than 1,700 miles journey from California's border with Mexico to its border with Oregon. It will take him around four months to complete the walk.

Yoon is mostly surviving on dehydrated food that he mailed to various P.O. boxes along the route.

In Acton, Renowitzky met up with Yoon to deliver some In-N-Out.

"There's no way I can re-pay him. I'm forever grateful," Renowitzky said.

Renowitzky was first profiled on Eyewitness News in 2013 when his wheelchair was crushed by a hit-and-run driver.

Actress Pauley Perrette saw our story and reached out to Renowitzky, offering to buy him a new wheelchair. Those wheels have given him the ability to increase his training and rehabilitation at Project Walk.

Recently, Renowitzky began training with robotic legs that allow him to stand up and walk.

"The first time I got into it, I shed tears. It's a life-changing device!" he said.

"After seven long years of fighting to see me standing up on my feet, it had a big effect, not only on me, but my family, my friends that have been on this journey with me," Renowitzky said.

Renowitzky set up a GoFundMe page and is asking for donations to help him walk again.

"It would make me feel so much happier to be able to take steps in my house and my front yard," he said

Meanwhile, Yoon said he will keep on walking until Renowitzky can join him on the trail.