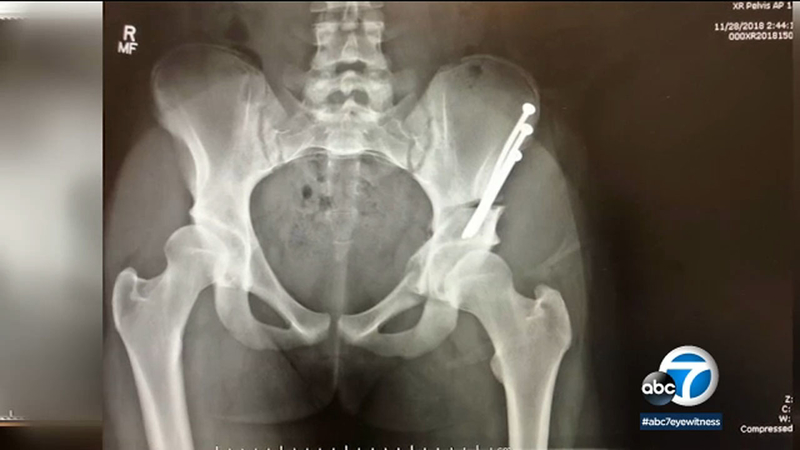 Imagine needing a hip replacement at the age of 17.

One local gymnast was facing the end of her career and potentially a lifetime of surgeries until doctors at Children's Hospital Los Angeles found a way to help her with a little known hip procedure. Now, 17-year-old Katelyn Searle is back in the gym doing what she loves.

Katelyn Searle, 17, of Castaic has poise, strength and grace. But, another gift helps her standout.

"I've always been a lot more flexible than the other gymnasts," said the Castaic resident.

Her dreams of using her hip flexibility to compete in college and, eventually, a college gymnastics career were nearly dashed when a mysterious hip pain sidelined her.

"It was really sharp and towards the end of the day it would be so stiff and hard to move," Searle said.

Her diagnosis was not what her and her family expected.

"German Shepherds sometimes have hip dysplasia. That's what I thought it was. Now my kid now has it," said her mother, Andrea.

CHLA orthopedic surgeon Dr. Rachel Goldstein says the hip socket is like a hat that should fit snugly around the ball.

"(Hip displaysia) can be everything from the ball being out of the socket to just being very flat cup," she said. "When you have hip dysplasia, that hat sits off to the side of your head and it doesn't do its job."

One in a thousand children are born with hip dysplasia, many of whom will likely go on to get a hip replacement. But for Searle, a surgery like that would've ended her gymnastics career.

"She would be more restricted in what she was allowed to do," Goldstein said.

Goldstein is one of a handful of surgeons in the U.S. who are trained to do a hip-saving surgery called Periacetabular Osteotomy, also referred to as "PAO." The surgery consists of carving out a cavity in the hip bone socket so it fits properly on the femoral head.

"The goal of hip-preservation surgery is either to prevent needing hip replacement or at least pushing them off until they are much older," Goldstein said.

She said most people facing a hip replacement could benefit from having the procedure done of them.