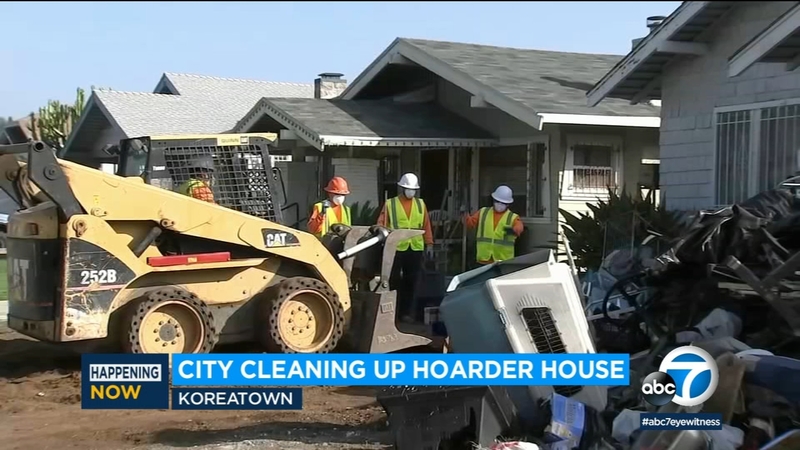 KOREATOWN, LOS ANGELES (KABC) -- Los Angeles city crews on Thursday began clearing away massive piles of trash outside a Koreatown home whose owner has been described as a hoarder.

The piles of junk, stacked about 8 feet high in some places on the property, are visible from the street and overhead. They include appliances, books, furniture and clothing, among other items, nearly surrounding the single-story house. Rats and cockroaches have infested the small mountain of debris.

Neighbors say they've been complaining to the city about the residential eyesore for years.

A 90-year-old woman lives at the home with her son, who had accumulated the junk and on Thursday watched city workers used a bulldozer to haul it away.

The cleanup is expected to provide some relief for nearby residents, as well as the homeowner.
EMBED More News Videos

Residents of a Koreatown neighborhood are relieved after the city said crews will start cleaning up a property where hoarding debris is piling up.

"It's overwhelming, honestly," Dwayne Jones, who lives nearby, told ABC7. "You see it every day, and to actually see the crews here -- I'm really just taken aback, how much stuff there is. It's very relieving to see this go."

Experts say hoarding is often tied to a form of emotional loneliness and isolation.

"It's almost like emotional insulation," John Tsilimparis, a Los Angeles-based psychotherapist, told ABC7. "It's the way that they fill in the gaps and the voids in their lives, with these possessions."