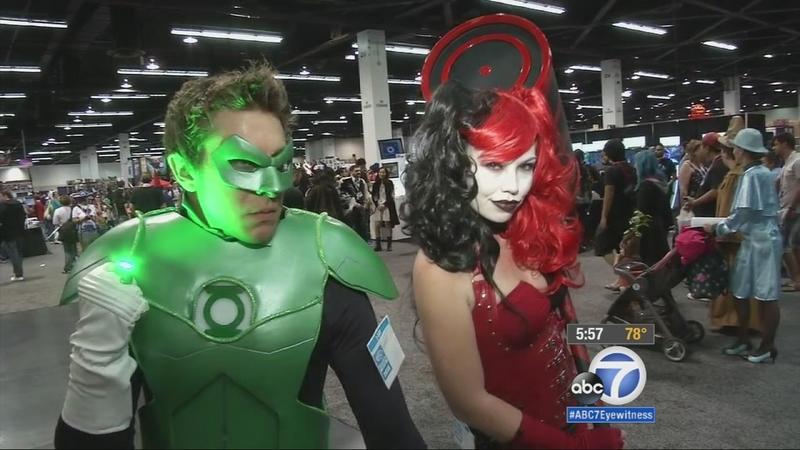 ANAHEIM, Calif. (KABC) -- More than 60,000 pop culture fans are expected to fill the Anaheim Convention Center this weekend for WonderCon.

"Wondercon is like the little sister of Comic-Con," said David Glanzer, the director of marketing for WonderCon and Comic-Con. "Comic-Con has over 130,000 people, last year WonderCon had about 60,000 people."

The two events are put on by the same organizers and feature many of the same types of activities: panel discussions, screenings and lots of vendors selling everything from action figures to mint-condition comic books.

And a highlight for many is the chance for many of these people to show off their best costumes ranging from the unique, the scary, the whimsical, even the robotic.

"I would say at this point it's become a lifestyle," said Michael Reindel, a Vista resident who was dressed as the Green Lantern. "When I'm not at work, I'm working on something as far as costumes go, you know?"

Reindel and his wife Cady Goodson have attended WonderCon the last several years. They say it's the people that keep them coming back.

"Superheroes, anime, silly Saturday morning cartoons, whatever you're into, you're accepted here and everybody just wants to be part of one big family," said Goodson, who was dressed up as Harley Quinn from Batman.

It's a family many of these convention attendees say continues to grow beyond what you'd expect.

"It's become a big family event now more than just your nerds or geeks coming to the thing, so it's a great time to be had by all," said David Gonzalez, a fan from Salinas.

WonderCon runs until Sunday at the Anaheim Convention Center.