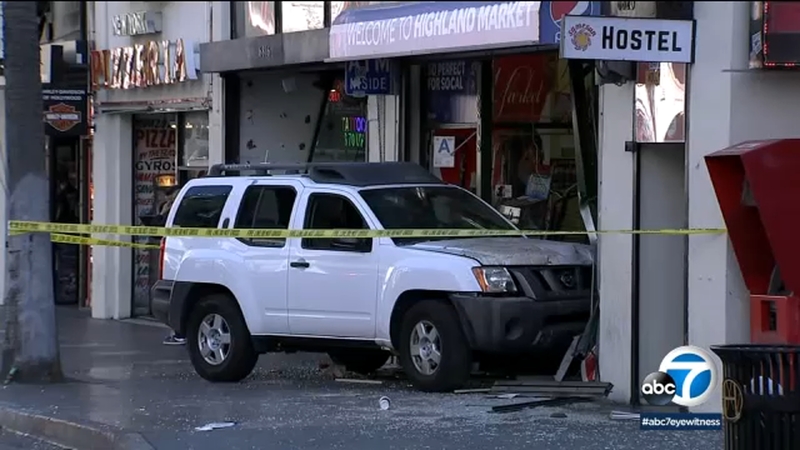 HOLLYWOOD (KABC) -- A driver who crashed into a storefront along Hollywood Boulevard, striking several pedestrians, including members of a local news crew, has been arrested on suspicion of driving under the influence.

The single-car crash involving a white SUV was reported shortly after 3 p.m. Friday at the Highland Market.

Four of the five people injured were taken to a local trauma center in serious to critical condition, according to the Los Angeles Fire Department. All of the victims were later listed in stable condition and are expected to survive.

Two of those injured are longtime reporter Hal Eisner and photographer Joab Perez with FOX11. The team was covering the reopening of the El Capitan Theatre when the driver lost control of the vehicle and careened onto the sidewalk.

The driver, only identified as a 55-year-old man, was not injured in the crash. He told police he fell asleep at the wheel, but witness said it was clear he never should have been on the road.

"I don't know if he fell asleep or not but he ran a red light coming down Hollywood Boulevard and he crashed into one of the stores. One person was under the car and another person (looked) like she broke both of her legs," said Monica Hernandez.

All lanes of the usually busy Hollywood Boulevard were closed off between Orange Drive and Highland Avenue, and were expected to remain shut down for several hours.
Officials said the building's structural integrity was not compromised.