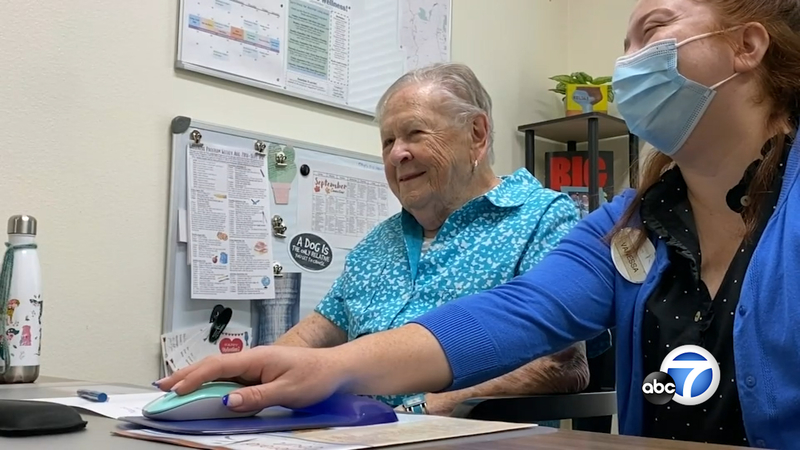 ANAHEIM, Calif. (KABC) -- Desiree Engle is 100 years old and a Holocaust survivor. Engle is also an artist and a spelling bee contestant. On Wednesday, she competed in a virtual nationwide competition representing the West Coast and her senior living center Emerald Court in Anaheim.

"It was very exciting. Spelling bees are something I never even considered before this happened [the pandemic], before last year," said Engle. "I found it very enjoyable and fun."

When Engle was 50 she earned her bachelor's degree from California State University, Fullerton. At 70, she earned her master's and taught art. Now, she also spends her time spelling.

"This was our second year actually being partners together. It's nice cause Desiree is basically the backbone of the team. I'm here for moral support," said Vanessa Fernandez, Engle's assistant. "But she does very well and inspires me to be a better speller."

"I'm a good speller and I know a lot of words and have a background fortunately way back... 70 years ago I could speak French," said Engle.

When Engle was a newlywed during World War II she said she fled the Nazis. When Germany invaded Yugoslavia, Engle said she spent four years in displaced persons camps. Engle eventually moved to America where she raised her family in Fullerton.

"She inspires me a lot. She's 100 years old and she so smart," said Fernandez.

Desiree is now inspiring others to pursue their passion at any age and said she's going to keep spelling. This year she placed third in the competition.

"I would be happier if I was first place. Third place is fine," said Engle. "The whole experience was really fun."