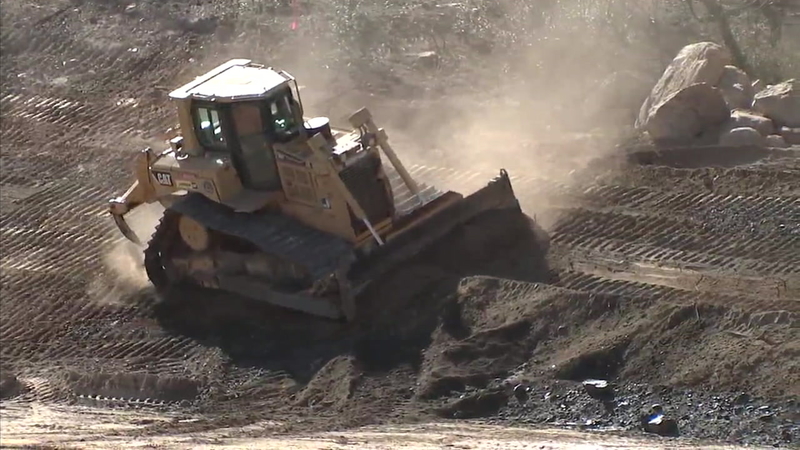 In Lake Elsinore, which endured the large Holy Fire in August, preparations were made to shore up a 60-year-old dam that sits directly above homes. It could be the last line of defense for properties, but if the rain becomes too intense it may not be enough.

Sandbags and K-rails were also brought in for homeowners in the McVicker Canyon area, one of the neighborhoods that could be evacuated.

"We're worried enough about it that we've already told our residents that they should prepare to leave," said Jason Uhley, with Riverside County Flood Control. "If we get a high-intensity rainfall event and we get the real debris flow off those canyons, it could actually destroy homes.

It's not just rocks and dead trees along the hillsides, but ash left from the blaze.

Phil Rechister lives on Amarose Street, which is directly below the dam and hillsides. He said he doubts precautions will block all of the debris.

"My neighbor went over there and said there's about a foot and a half of ash in the mountains, which probably is going to slide when the first rain comes," he said.

The hillsides of Malibu and Thousand Oaks remained charred and vulnerable after the Woolsey Fire, which leaves residents in another dangerous situation as a rainstorm heads to the Southland.

Rechister said he's ready to evacuate if need be.

"Worst comes to worst, we take the animals in the truck and leave," he said.

Flood control officials said their main concern comes when a portion of the storm moves into the area Thursday.

No mandatory evacuations were ordered, but voluntary ones were issued Tuesday.

The following areas were affected: Amorose, Alberhill, Glen Ivy A, Glen Eden, Grace, Horsethief A, Laguna A, Matru, McVicker A, Rice and Withrow A zones.

Agoura Hills residents recently affected by the massive and destructive Woolsey Fire are now preparing for possible mud and debris flows that could result from a storm set to hit the Southland.

As for other areas recently charred by wildfires, Malibu, Agoura Hills and Thousand Oaks also have exposed and vulnerable hillsides.

In those areas, residents are also taking precautions even as some of them barely got home after being evacuated by the Woolsey Fire.

Steven Frasher, with Los Angeles County Public Works, said the loose soil and debris could easily flow down a hillside if the rains are intense enough.

The storm is expected to bring between 1 and 3 inches of rain to the region starting Wednesday night.