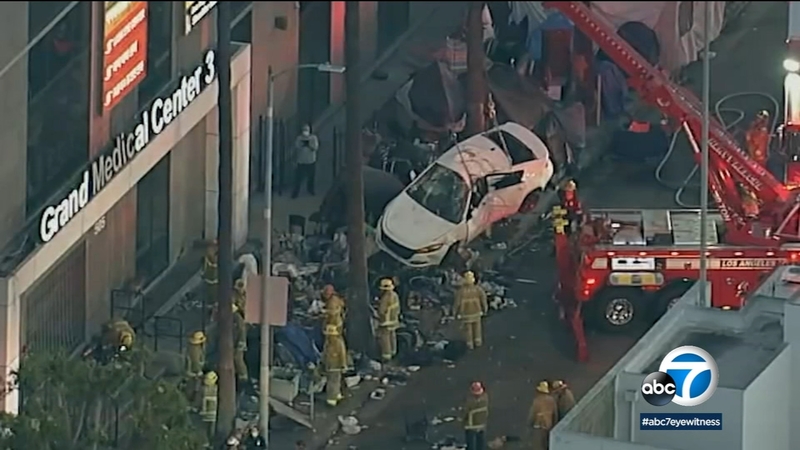 4 hospitalized after car slams into homeless encampment in Koreatown

The violent collision occurred shortly before 6:30 a.m. in the 500 block of South Virgil Avenue, leaving one person trapped underneath the white Dodge before being extricated by firefighters, according to the Los Angeles Fire Department.

Authorities say the Dodge was traveling southbound on South Virgil Avenue when it crashed into another car, jumped the curb and slammed into the encampment.

The driver and two passengers were taken to an area hospital in fair condition. One homeless individual who was pinned under the Dodge was also rushed to the hospital in critical but stable condition, fire officials said.

Firefighters used a crane to lift the heavily damaged sedan and remove it from the encampment.

No arrests were immediately announced. The cause of the crash is under investigation. LAPD says the people in the Dodge are not cooperating with the investigation.

Area residents say that section of South Virgil Avenue can be a speed way, saying cars fly through that road every day. They say what happened Tuesday morning was bound to occur.

"It's just not the fast cars but all of them. You know, they're in a rush to go nowhere. So I knew eventually one day, this was going to happen," described Mark Johnson, who lives near the crash scene.

"There's oncoming traffic that comes around the bend really quickly, and there is poor visibility through here, so I'm not surprised. I mean, this happens al the time," said fellow resident Ciara Bogdanovic.

Bogdanovic and other residents have asked the city to at least post a stop sign to slow down the traffic.