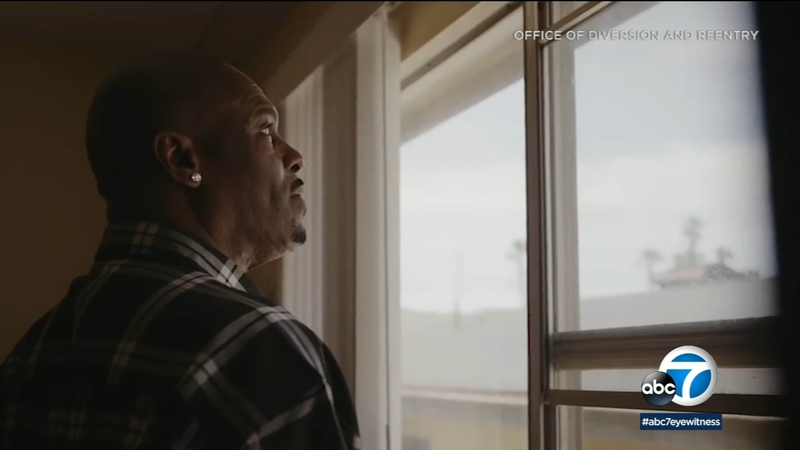 LOS ANGELES (KABC) -- Thousands of the mentally ill in Los Angeles end up in jail. But there are programs that aim to keep them returning once they get out, by offering counseling and housing services.

Stephen Baker has benefited from such a program.

Baker will tell you he found his family on the streets, hanging with the wrong crowd and "basically just doing typical knucklehead stuff with the other kids" that landed him behind bars. He served three prison sentences for burglary, grand theft auto and possession of stolen property but no violent offenses.

"I grew up like any other African American in my community, you know peer pressure, joined the gangs," Baker said.

Once out he tried to hold onto odd jobs but struggled and was homeless nearly seven years until he landed in jail again. But this time, he says would be his last.

With a judge and the prosecution's approval, Stephen was plucked out of the criminal court system and enrolled in an innovative permanent supportive housing program developed by the county Office of Diversion and Re-entry.

The program identifies homeless inmates who have mental illness or substance abuse disorders and provides them with housing and mental health services.

"These are people who have experienced decades of homelessness, cycling in and out of prison/jail and emergency rooms," said ODR director Peter Espinoza.

They identify homeless inmates, like Stephen, who have mental illness or substance abuse disorders and not only provide them with housing but also mental health services. They're assigned a case manager, a therapist, and given whatever medical treatment they need.

"We know that once we stabilize them with medication and housing, almost anything is possible for them. Many of them go back to school, many of them are employed."

Since its inception in 2016, ODR has diverted some 4,400 people from county jail to community based services.

And, according to LA County Supervisor Mark Ridley Thomas, 90 percent of them have remained housed after six months.

"Its an impressive story to be able to tell. Its about saving lives and improving lives causing communities to be safer," Ridley-Thomas said.

A recent Rand Corp. study from 2018 found that on any given day more than 5,000 people in LA county jails had mental health issues.

And the financial bottom line? ODR costs taxpayers $70 a day per person. Compared to the county's cost of $600 a day for inmates with serious clinical needs.

"A lot of homeless people think these programs don't work but they do," Baker said.

Stephen has been off the streets four years now and credits his case management team at the Amity Foundation for helping him find his way. He is now an advocate, visiting Skid Row regularly to encourage people to get off the streets.