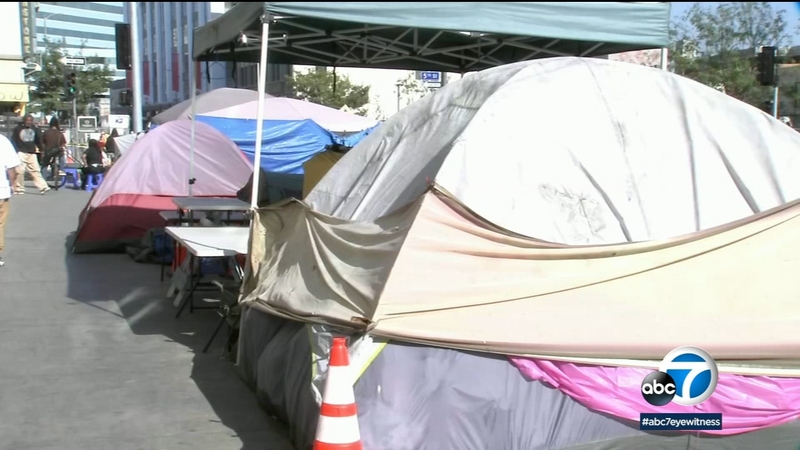 Should the homeless be forced into mental health programs?

LOS ANGELES (KABC) -- As the homeless crisis grows and we hear of the number of homeless who suffer from mental health and alcohol and drug issues, some people in the community often pose the same suggestion.

"I believe that we should have mandatory rehab."

That was from a recent community meeting

There is a law, SB1045, that was passed by the Legislature last year that would create a conservatorship for people with severe mental health and substance abuse disorders.

Simply put, with court approval, they could take guardianship over people and put them into treatment. Los Angeles County is looking at this right now.

Los Angeles County Supervisor Kathryn Barger says "The department is putting together the proposal right now but conservatorships are going to be an important component to those that are on the street that are chronically homeless and mentally ill."

It's a controversial issue but in the last few months San Francisco passed an ordinance to be able to implement it there.

The author of SB1045, state Sen. Scott Weiner from San Francisco says: "The current conservatorship laws in California are not meeting the needs particularly of people with severe drug addiction."

Even though the local approval passed in San Francisco months ago so far not a single person in that city has been sent to treatment.

Barger says "A conservatorship goes through the courts so it's going to have to pass legal muster and I'm sure it's not for everybody but there are individuals that this criteria is set up for."

On Skid Row homeless people we spoke with are split on the idea.

"A lot of people like living in fantasies they don't really want to change," says Mary Jacobs. She is homeless and bipolar and thinks conservatorship is a bad idea.

We asked her "Do you think it's against your civil rights to be forced into treatment?"

"Yes," she responded, "And I think it's also against your civil rights to be forced to be sleeping in the streets."

Wanda Hudson says she has a friend who won't get treatment.

"But she needs help. It's a mental thing. I think it's best for them to get help."

Even if they don't want to go?

"Even if they don't want to go," says Hudson.

The ACLU of Southern California opposes the plan, saying "...forcing people experiencing homelessness into our broken mental health treatment system will not solve the homelessness crisis. It does nothing to improve the quality of community-based mental health services."

Rev. Andy Bales who runs the Union Rescue Mission says he's in favor of the idea and officials should move quickly.

Bales says "The concern I have about SB1045 is it looks like they have to have everything in place. They have to have the beds, they have to have the wraparound services, then they have to have the conservators lined up before they can ever be able to launch it. That's going to take years and we're going to lose people."
Report a correction or typo
Related topics:
societydowntown lalos angeleslos angeles countyhomeless in southern californiahomelessdrug treatmentdrug addictionmental health
Copyright © 2022 KABC Television, LLC. All rights reserved.
HOMELESS IN SOUTHERN CALIFORNIA
Police union's new ads blast Karen Bass for missing votes in Congress
Man in wheelchair who was shot near South LA McDonald's has died
Gambling ballot initiatives confuse voters ahead of November elections
Granada Hills residents express concern over homeless encampment
TOP STORIES
SoCal Memorial Day weekend travel nightmare amid flight cancelations
Coast Guard searching for swimmer gone missing off OC coast
SoCal teens arrested after carrying loaded guns near elementary school
Vigil held in Hollywood honoring Texas school shooting victims
2 injured after gunfire erupts at North Hollywood swap meet
California Governor Gavin Newsom tests positive for COVID-19
Texas gunman threatened rapes, shootings on Yubo app, users say
Show More
Police inaction moves to center of Uvalde shooting probe
California drought forces cancellation of fireworks show in Claremont
Suspect shot, killed by Ontario police after chase ends in crash
LA County purchases $750K worth of baby formula amid shortage
Uvalde school police underwent active shooter training 2 months ago
More TOP STORIES News