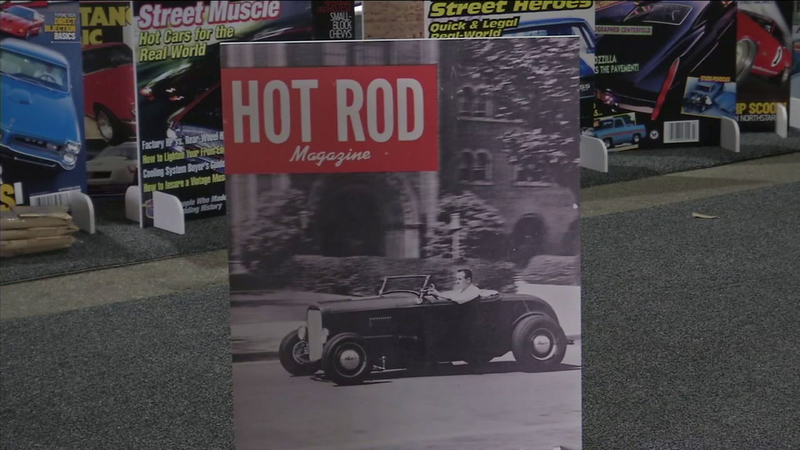 POMONA, Calif. (KABC) -- Big anniversaries are fairly rare, but during weekend, the one and only Hot Rod magazine marked 70 years of automotive influence with a big show and racing action in Pomona.

"We basically get to see the whole history of the aftermarket car industry, with people taking cars and making them faster. We see things from the 40s, when we started, and we see things that guys finished last week, and they were using new technologies," said Harrison Card, event planner for Hot Rod.

It was a festival of speed and shine. Magazine cover cars of the past were displayed and others went down the famous Auto Club Pomona quarter-mile drag strip.

Dozens and dozens of the cars either featured in or inspired by the magazine strutted their stuff.

In his is new book, "Hot Rod Empire," veteran author Matt Stone traces the timeline of how a young guy from Barstow named Robert E. Petersen turned a $400 investment into a publishing juggernaut that appealed to hobbyists beyond the custom car world.

From teen fashion, to photography, to scuba diving, to fishing and hunting, Petersen Publishing offered titles to suit just about any hobby.

"The thing that Mr. (and Mrs.) Petersen really understood was enthusiast specialty publishing," noted Stone. "If there was a vertical specialty interest of some sort, they published a magazine for it, and ultimately got up to 88 titles."

Robert E. Petersen died in 2007, but his legacy lives on in the form of his first magazine venture, still very much published today. Hot Rod became a major cultural influence around the country and around the world.

Coincidentally, another institution of Southern California culture was also founded in 1948, the In-N-Out Burger chain. It's joined Hot Rod in the 70 year celebration.

"It was one of those things where we kind of looked at their T-shirts with car-themed artwork, and we thought, 'These guys love cars too.' And we both started in 1948. Let's throw a big party,'" Card said.

If you were anywhere near Pomona during weekend, you may have heard some distinctive sounds of high-powered engines producing the audio track of history and the history of car culture, all inspired by a magazine which lives on, 70 years after humble beginnings.
Report a correction or typo
Related topics:
automotivepomonalos angeles countycar showcarclassic cars
Copyright © 2022 KABC Television, LLC. All rights reserved.
TOP STORIES
Death toll rises to 21, mostly children, in TX school shooting
Uvalde school shooting: What we know about 19 kids, teacher killed
Watch Steve Kerr's raw, emotional plea after Texas shooting
CA water board adopts ban on watering some green spaces amid drought
Suspect wounded after CHP, deputies are fired upon in East LA
Mater Dei HS celebrates 3 Heisman Trophy winners amid controversy
More water restrictions expected this summer
Show More
Biden says 'we have to act' after Texas school shooting
What is monkeypox? CDC updates doctors as CA reports 1st possible case
11 killed in shooting attacks on 2 bars in Mexico
How to talk to kids about Texas school shooting
A look at some of the deadliest US school shootings
More TOP STORIES News