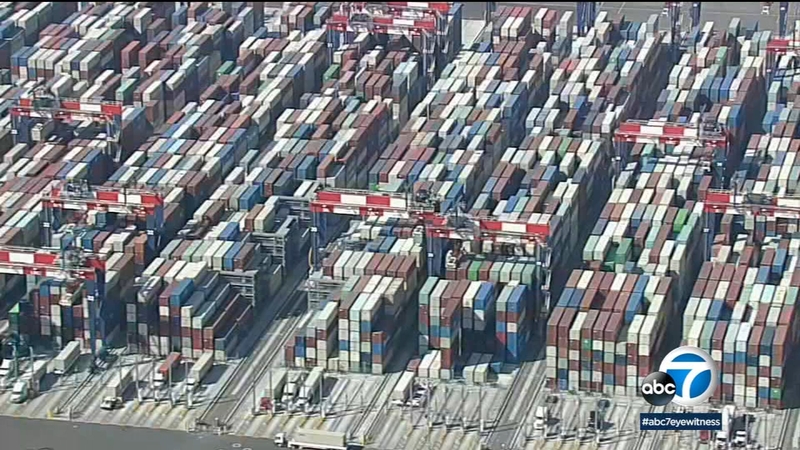 LOS ANGELES (KABC) -- Anchored off the Southern California coast, many people see a record-setting backlog of container ships. But others, like Amanda Gattenby of Crate Modular, see opportunity.

"I see 1,000 units that we can deploy in Southern California in one year," said Gattenby.

Because of the trade deficit in the U.S., there is an abundance of single-use shipping containers which Carson-based Crate Modular can quickly repurpose into affordable housing. Gattenby, Crate Modular's vice president of development, explains why: "They're made to stuff with 65,000 pounds and stacked 10-high on a on a cargo ship. So it translates very well to structural integrity as well as, we insulate them very well so you don't hear anything unit-to-unit. They're very good for affordable housing."

An example of Crate Modular's work can be found in what used to be a parking lot, just around the corner from the Men's Central Jail in Los Angeles. Care First Village is now the site of 132 units for transitional housing.

"You would never really know that they were containers. Quite frankly, they look like college dorms," Los Angeles County Supervisor Hilda Solis said.

"We are part of the solution to stabilize the supply chain, so we are talking to ocean carriers to offer relief from the other ports," said Bryan Brandes, Port of Oakland Director of Maritime.

The cost to build Care First Village was roughly half of more traditional affordable housing or low-income housing. And the entire project, one complete with landscaping and security, was completed in six months.

"It takes normally years to build something of this size if it were brick and mortar," Solis said. "But because they're containers, obviously that helped to expedite the project."

Said Gattenby: "Most people know time is money. And if you could save six months of time, you save a tremendous amount of money."

Private developers are also seeing the advantage of working with Crate Modular. A site in the Florence-Graham area of South Los Angeles will soon add 20,320-square-foot studio units of affordable housing to the neighborhood, each with 8-foot-6-inch ceilings, a kitchen, cupboard space and ADA-compliant restrooms. And because they are pre-fabricated, the disruption related to construction is reduced.

"We set each floor on four consecutive Fridays," said Gattenby. "So in one month, this project went from foundations to a four-story building."

Founded in 2018, Crate Modular was perfectly positioned for a pandemic-created environment that drove decision-makers to act quickly and provide more affordable housing -- not just a shelter with a bed, but a place to live and call home.

"I've been in affordable housing for many years, and there are many barriers to completing projects on budget and on time, and we want to be a solution for that," said Gattenby.