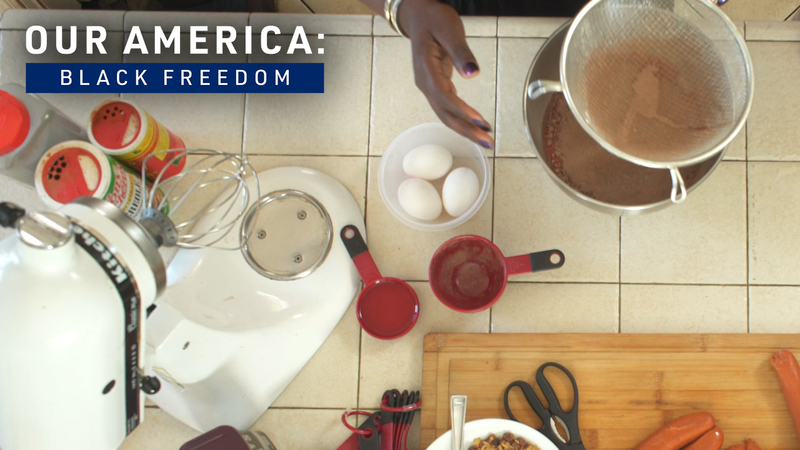 LOS ANGELES -- Elita Adjei was born in Houston and raised in California, where she and her family carried on Juneteenth traditions and celebrations passed down over the years.

Adjei welcomed us into her home and kitchen to learn more about some of the staple dishes she prepared and their significance to Juneteenth history.

"Food is almost everything when it comes to Juneteenth, especially when you're having a ton of family and friends over," she said. Adjei, who owned a bakery in Houston, stressed the red velvet cupcake is the "queen of the ceremony."

"The main thing about the red velvet cupcake: It does have red dye in it, but as red dye that's added in with cocoa," she said.

She prepared red beans and rice, red hot links and BBQ ribs. Red is a common theme in the dishes and decorations.

"It's symbolic to the blood of the slaves. But it's also very much so about the resilience of slaves and what they went through -- our ancestors," she said. "That's important for people to know and understand."

Red also has a particular significance across a number of West African communities and societies, said Dr. Claude Clegg, a historian whose work focuses on the African diaspora. It can represent spirituality and strength, as well as life and death.

The color is also practical, he added.

"It is the color of kola nuts, which is an import from West Africa, again, a material import that survives the slave trade," he said.

Adjei, who is also a mother of five, learned to cook from her mother and grandmother.

"My mother did the main teaching, and when I stayed with my grandmother in Houston, she would teach us how to cook -- lots of cakes made from scratch," she said.

Adjei said she enjoys having the family come together and ensures her children do not forget the history of Juneteenth. She shared some of the conversations she's had with her children over the last year after Minneapolis police officer Derek Chauvin murdered George Floyd.

She said she helped them connect the dots "and understand that racism is deep-rooted."

While some outside of Texas may not be as familiar with Juneteenth or share the same celebratory traditions, Adjei is glad more people want to learn.

"I was overjoyed when people realized that there was something called Juneteenth," she said. "My heart. I just was thinking, 'Finally, people are going to know about this very special tradition that even if you weren't from Texas, you should understand it.' "

As she reflected on the significance of Black freedom, she encouraged people who are not Black to think about their role.

"Non-Black people should think about what Black freedom looks like and how they can play a part in understanding, relating," she said. "I hope that people take away that Juneteenth is about a celebration. It used to be called Jubilee Day," she said. "It was a celebration."

In honor of Juneteenth, we're telling stories of what Black freedom means today, from a 94-year-old's quest for a national holiday to the fight for reparations to cultural celebrations. Click here for more stories from your city and around the country.