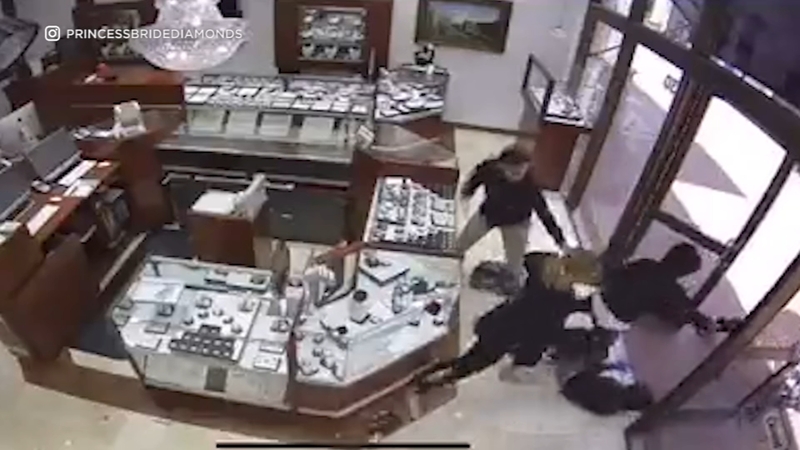 HUNTINGTON BEACH, Calif. (KABC) -- A smash-and-grab robbery at a jewelry store in Huntington Beach ended with an employee counterpunch, as store workers fought back against the hammer-swinging thieves.

The incident happened at about noon at the Princess Bride Jewelry store in the Bella Terra Mall, according to police. Store surveillance video captured the ordeal.

The video shows four hooded individuals enter the jewelry store. The first suspect then smashes the front jewelry case with a hammer.

At that point, a store employee is seen running out and starts attacking one of the robbery suspects.

Another employee quickly joins in swinging and kicking.

A smash-and-grab robbery at a jewelry store in Huntington Beach ended with an employee counterpunch, as store workers fought back against the hammer-swinging thieves.

The video also shows one more employee join into the mix with a barstool.

The employees successfully fought off all four robbers.

"This is the first time I've seen anything like this ever recorded," said retired LAPD detective Moses Castillo.

A chaotic smash-and-grab robbery was captured on surveillance video at a jewelry store in El Monte, prompting a search for the suspects.

One of the suspects is seen in the video reaching into a shattered jewelry case, but a note posted on the store window Sunday evening said, "Fortunately, they were not able to get anything."

Although the store employees were successful in their fight, one of the employees was struck with the hammer.

Experts warn that it's dangerous to fight back in a situation like this.

"They were very fortunate the criminals did not have any weapons beyond what they used to smash that display case," said law enforcement expert Bruce Thomas. "If there was a gun involved, this could have turned out very, very different."

Police are searching for two men who stole merchandise from a Kay Jewelers store at the Brea Mall during a smash-and-grab robbery.

"My hope is that businesses train their employees knowing when to activate the alarm, knowing when to dial 911 and give a description of what's happening," Castillo said. "That's the key."

Officials say no major injuries were reported, and the suspects fled the area before police arrived.

The investigation is ongoing. No arrests have been made. The shop will be closed for the next several days.