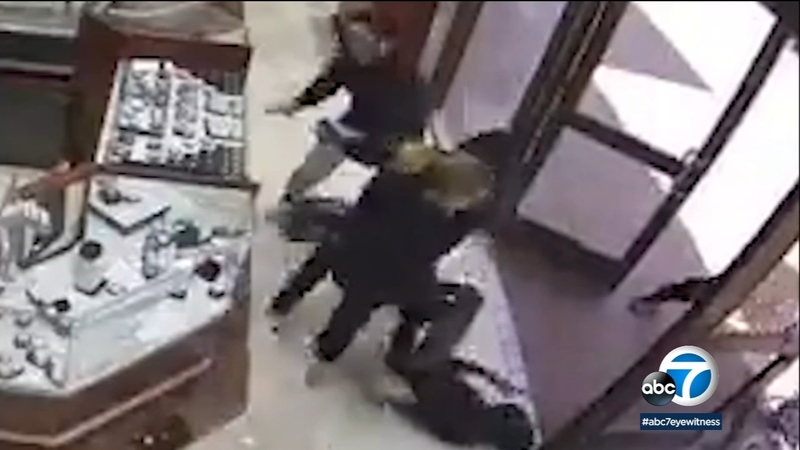 OC jewelry store co-owner speaks out after fighting off robbers

HUNTINGTON BEACH, Calif. (KABC) -- The store owners of a jewelry shop say they have no regrets defending, and fighting off, a group of hammer-swinging thieves during a smash-and-grab robbery in Huntington Beach.

"This is our family business, we wanted to protect," said Sarah Vaca, Princess Bride Jewelry store co-owner. "We feel very strongly about like, I guess like, protecting what's ours."

The incident happened at about 12 p.m. at the Princess Bride Jewelry store in the Bella Terra Mall.

Store surveillance video shows four hooded individuals enter the store. One of the suspects then smashes the front jewelry case with a hammer while another tries to grab some of the contents.

At that point, a store employee is seen running out and starts attacking one of the robbery suspects. Another employee quickly joins in swinging and kicking.

"It was very high energy a lot of adrenaline," Vaca said. "I've never been in a fight before in my life, so that was crazy."

She joined in the fight by grabbing a chair and hitting one of the robbers on his back.

"I was just looking for something heavy that I could use to help (them) the best I could with, and something that could deter them from continuing to fight us further," Vaca said. "My brother ended up intercepting one of them, and actually clocked one of them in the face."

One store worker repeatedly kicked one of the robbers who was lying on the ground.

The employees successfully fought off all four robbers. During the fight, Vaca's brother appears to get struck in the head by a suspect with a hammer, but he wasn't badly hurt.

While this situation didn't turn out well for the robbers, some law enforcement experts say that had the robbers been more heavily armed, the situation could have turned out much worse.

"No one in that store's life is worth any diamond or watch or piece of jewelry," said law enforcement expert Bruce Thomas. "They were very fortunate the criminals did not have any weapons, beyond what they used to smash that display case. If there was a gun involved, this could have turned out very, very differently."

After a complete inventory, a store owner said the robbers only got away with three rings.