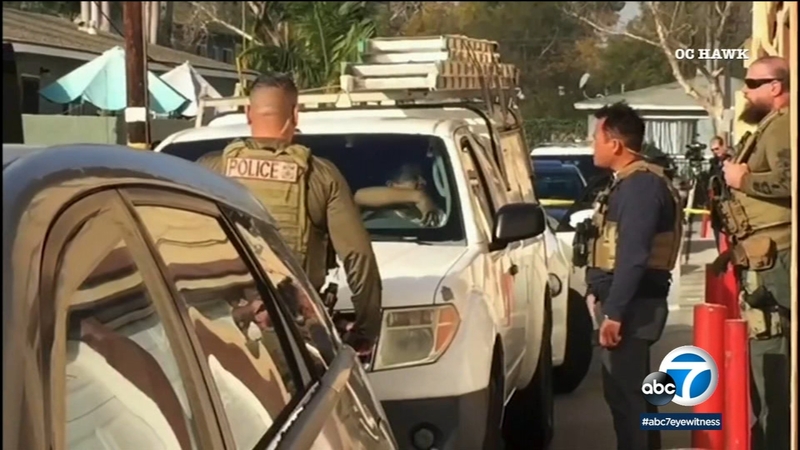 SANTA ANA, Calif. (KABC) -- Video shows a confrontation in Santa Ana between Immigration and Customs Enforcement agents and a man they say had been ordered out of the country and had been ordered deported twice before.

As the man locked himself in his truck and refused to come out, a crowd began growing and taking pictures.

Santa Ana police were on scene to provide crowd control, but did not help with the enforcement actions.

Eventually, the Santa Ana officers left and with the size of the crowd growing, the ICE agents decided to withdraw as well.

The incident began Tuesday around 6:30 a.m. in the 800 block of S. Townsend Street when agents with ICE's Enforcement and Removal Operations made a traffic stop on Octavio Martinez.

A day after the confrontation, Homeland Security issued a statement offering its side of the incident:

The agency said Martinez, identified in their statement as Octavio Martinez-Resendiz, had been deported twice from the country and had been convicted of child cruelty, spouse abuse and fraud in 2002. They say he served 45 days in jail at that time and he was deported to Mexico after his release.

They say he managed to return to the country and was arrested by ICE in 2015 and then ordered removed from the country in 2017.

Officers with ICE's Enforcement and Removal Operations spotted him leaving his home Tuesday morning and attempted to make a vehicle stop to take him into custody.

He locked himself in his vehicle and refused to come out. A crowd of at least 10 people was gathering and taking pictures, while the Santa Ana police showed up to provide crowd control.

DHS says the ERO officers had an arrest warrant and immigration judge removal order, but he refused to comply.

Martinez spoke to Eyewitness News about the experience, which he described as scary. He and his wife disputed some of the information provided by ICE, saying he has no criminal background.

Martinez said he was on his way to work not far from his home when he was boxed in by unmarked police cars in an alley.

Martinez said he locked the doors and started recording video.

"It's scary because they are so aggressive," he told Eyewitness News.

Martinez alleges the officers identified themselves as FBI and threatened to use a Taser on him if he didn't get out of the truck.

His wife and children rushed over. Some of his family were seen crying. His wife said she later learned that the officers were with the Department of Homeland Security.

Santa Ana police provided traffic and crowd control and said they learned DHS was trying to arrest an individual for a warrant related to an immigration offense.

The document held up to the window from DHS dated Aug. 14, 2019 stated there is probable cause to believe Martinez is removable from the U.S., but provided no reason.

Another document showed an immigration judge's decision dated November 2017 to remove Martinez from the U.S. to Mexico.

It appears Martinez applied for asylum but was denied. The couple, who have four children, said problems started in 2015 when ICE agents knocked on their door. They allege ICE mistook Martinez for someone else with a similar sounding name.

Martinez's wife said her husband has no criminal background.

Martinez said ICE took him into custody, held him for three months until an attorney could help.

During Tuesday's incident, Martinez said he called his attorney right away. The federal officers left after about three hours.

Martinez said his biggest concern is his family, and he fears getting arrested just walking on the street and plans to meet with his attorney.