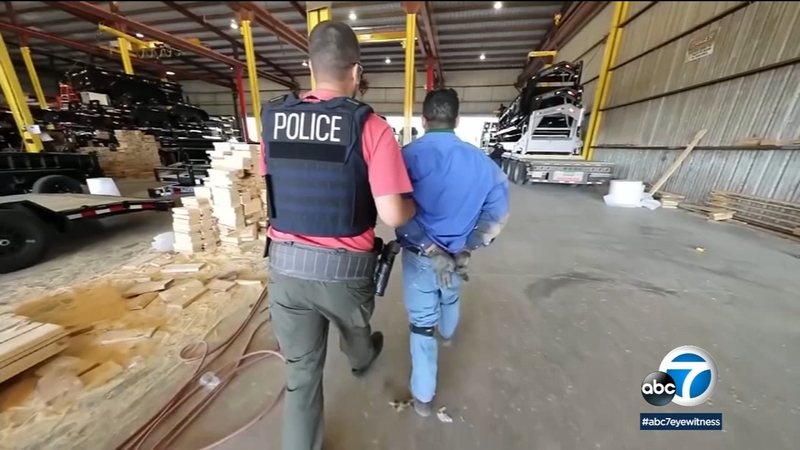 LOS ANGELES (KABC) -- Immigration and Customs Enforcement's top official told ABC News on Friday that the agency plans to arrest more than 2,040 undocumented family members, adding that "there has to be consequences" to entering the United States illegally.

ICE Acting Director Mark Morgan confirmed the planned enforcement in an interview with ABC News Live. Despite a recent tweet by President Donald Trump that indicated "millions" of deportations would begin next week, Morgan said no such operation was in the works.

The targeted individuals have already received deportation orders but are still living in the United States, Morgan said.

The development came as CNN, citing a senior immigration official, reported that ICE would move forward on Sunday with the arrest and deportation of families with court-ordered removals.

According to CNN, the Executive Office for Immigration Review announced last year that it had started tracking family cases in 10 immigration court locations - major U.S. cities including Los Angeles.

In a statement, the Los Angeles Police Department said it was "aware of upcoming Immigration and Customs Enforcement (ICE) actions beginning this Sunday, directed toward individuals who have been issued final deportation orders. These enforcement actions will include individuals residing in the Los Angeles region."

MORE: What to do if ICE agents show up at your door

The LAPD said it was not participating or assisting in any such operation.

"This is not about fear," Morgan told ABC News. "No one is instilling fear in anyone. This is about the rule of law and maintaining the integrity of the system."

Immigration activists believe this is the wrong thing to do.

"What we see with these threats is to create not just fear amongst the individuals that they're targeting but fear amongst the entire community," said Angelica Salas of the Coalition for Humane Immigrant Rights of Los Angeles.

Federal officials say a record number of migrant families have arrived at the southern border in recent months. Of the roughly 144,000 migrants stopped by U.S. authorities in May, more than 105,000 came as families.

"They do not have to open their door to any ICE agent unless they have a warrant with their name on it, not someone else's name on it. You have the right to remain silent, you don't have to offer any information about your immigration status to them," Salas said.

L.A. Mayor Eric Garcetti issued a statement saying, "Los Angeles will always stand with our immigrant brothers and sisters, and our law enforcement officers will never participate in these actions. No Angeleno should ever have to fear being snatched from their home or separated from their loved ones - and we are doing everything we can to provide immigrant families with the information and support they need."