The mysterious disappearance of a Coachella Valley couple more than three years ago has been solved with the arrest of three men this weekend, officials say.
KABC 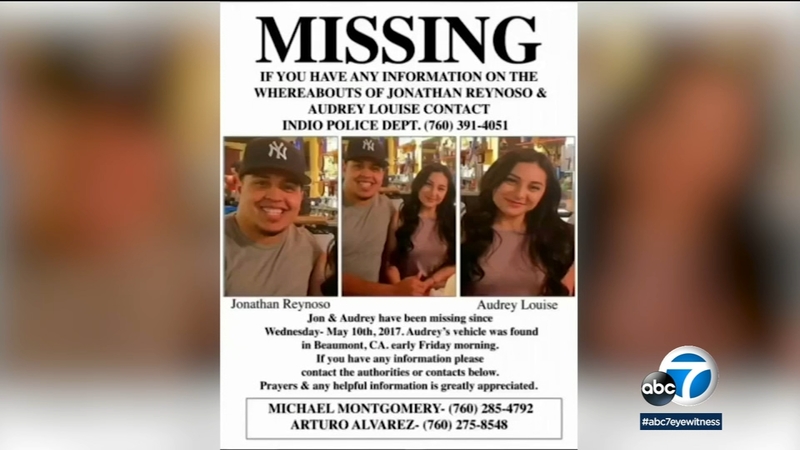 INDIO, Calif. (KABC) -- The mysterious disappearance of a Coachella Valley couple more than three years ago has been solved with the arrest of three men this weekend, officials say.

Their vehicle was found along the 10 Freeway in Beaumont the same day they were reported missing . But other than that, investigators say they had few clues in the case.

"For all intents and purposes at the time, it was as close as you can get to an unsolvable homicide," said Riverside County Sheriff Chad Bianco.

This weekend, authorities arrested three men in connection with their murder.

Manuel Rios, 28, of Coachella, Abraham Fregoso, 32, of Indio and Jesus Ruiz Jr., 41, of Stockton, were taken into custody Saturday , according to the Riverside County Sheriff's Department.

Rios and Fregoso, who were already behind bars on unrelated charges, have been charged with murder. Ruiz, who was arrested in Stockton, is charged with being an accessory after the fact.

Fregoso and Rios are also charged with the special circumstance of killing a witness.

Authorities say Moran watched the murder of her boyfriend before she too was killed.

Officials aren't discussing potential motives, but say the victims and suspects knew each other through mutual friends.

The trio were arrested after sheriff's deputies obtained unspecified information that linked them to the murders, said Sheriff's Lt. Walter Mendez.

Investigators did some digging for remains at several homes in the Coachella Valley. The sheriff says he thinks they have the remains of the missing couple but they are awaiting DNA results to confirm.

Aubrey Moran, 26, and 28-year-old Jonathan Reynoso have been missing in the Coachella Valley since Wednesday, May 10, 2017.

Prior to the pair's disappearance, Moran left her Coachella home to pick up Reynoso, who may have been returning to the Coachella Valley from the Brawley area the day the couple vanished, according to authorities.
Moran said she was going to give Reynoso a ride to his Palm Desert home, but the SUV she drove was later found parked on the side of Interstate 10 in Beaumont. A police bloodhound detected their scent near the SUV, but the trail disappeared about 50 feet from the vehicle.