With homes selling faster and for more than the asking price, the housing market is thriving across the country. It's particularly intense in counties like Riverside and San Bernardino, where experts say prices are slightly more affordable.
KABC
By Leticia Juarez and Grace Manthey 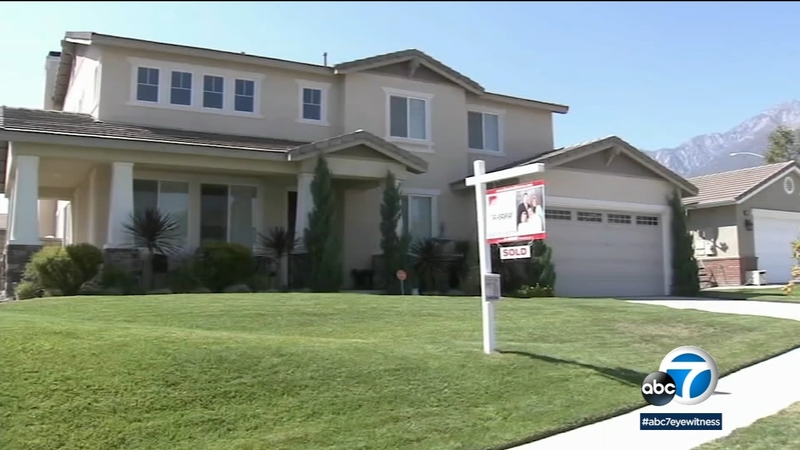 RIVERSIDE, Calif. (KABC) -- Around this time last year, the COVID-19 pandemic had caused record-breaking unemployment numbers. But amid all that economic turmoil, remote work and low interest rates are continuing to fuel a housing boom.

"This is one of the hottest spring selling seasons we've ever seen in the U.S. housing market," Senior Economist at Zillow, Jeff Tucker said.

It's particularly intense, he said, in counties like Riverside and San Bernardino, where homes tend to be more affordable, especially for first-time home buyers.

"First-time homebuyers really struggle to afford anything in Los Angeles itself," Tucker said. "So, they tend to look inland. And that's where it's still relatively feasible to find a family size home at an affordable price."

These trends in the Inland Empire are part of a nationwide trend of "extraordinarily hot" housing markets in the inland west, from Spokane, Washington and Boise, Idaho to Las Vegas and Arizona, in addition to the Riverside and San Bernardino areas, Tucker said.

Brian Rodriguez bought his first home in Fontana with an eye on the future.

"We are expecting a child. My wife is due next month and we really like the school district," he said.

Rodriguez also seems to have been lucky and found a house for a lot cheaper than he and his wife were going for.

The pandemic seems to have accelerated decisions for many first-time homebuyers, according to Tucker.

"Maybe they thought they could fit in their little apartment in LA for another few years. Just put it off down the road. But now they've got a pandemic puppy, they want a backyard, maybe they're having kids, maybe they need a home office to do their work from home," he said.

With more need for space, people may make the decision to buy a home now, instead of in a few years.

"Then, the homes kind of disappear quickly," Tucker said.

Homes are selling faster across the state, but the Inland Empire is seeing some of the largest changes.

Riverside and San Bernardino Counties both saw a drop of nearly two thirds in the typical amount of days it took for a house to get to a pending sale, from 30 days in December 2019 to just under 11 days in December of 2020, according to Zillow data analyzed by ABC7.

Experts like Jenkins and Tucker said it's because there just aren't as many homes available to buy.

"There is no inventory," said Jenkins. "I mean in Riverside this morning - all of Riverside - there are only 208 houses for sale at this moment."

And not only are homes selling faster, they are also selling for more.

The percentage of homes in the Inland Empire that sold above the original list price tripled between December 2019 and December 2020, Zillow numbers show.

Zillow data also shows an increase in the dollar amount that homes are selling over the list price, especially in Riverside and San Bernardino Counties.

"If you list your house at a reasonable price you are going to get multiple offers and honestly most them are way over asking, anywhere from $10,000 to $40,000 and $50,000 over. And I have even heard more," said Jenkins.

Zillow's data on homes selling above the asking price tends to lag by a few months, so data is only available through December.

Tucker said their most recent data from March 2021 shows annual appreciation - the year-over-year increase in home values - at 14.5% in Riverside and San Bernardino versus about 9.5% in LA and Orange County.

"Those are off the charts numbers, we shouldn't expect to see double digit price appreciation in the housing market," Tucker said.

The future of the market isn't clear, according to Tucker. He said he expects prices to plateau, especially in more expensive areas, but isn't sure when it will begin.

In the Inland Empire, he said he suspects prices still have "a ways to go," because of the affordability of the region. Builders are also heading out there where there is more land available.