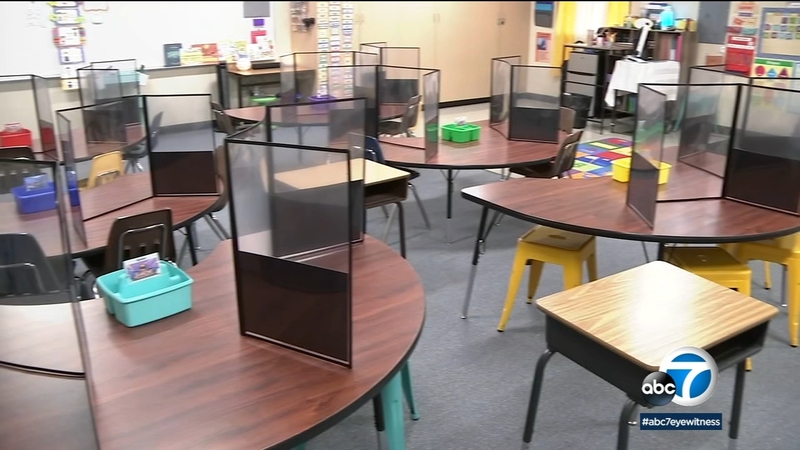 LUCERNE VALLEY, Calif. (KABC) -- The first Inland Empire elementary school to be granted a wavier to reopen to in-person instruction will be welcoming students back to campus next Thursday. Lucerne Valley Elementary School is offering a hybrid model, limiting class size to approximately eight to 12 students per room.

"I'm excited to see my students again," said teacher Krystal Nelson. "It's really lonely on campus without students around."

Students who opt to return to campus will either be in class Monday and Tuesday or Thursday and Friday. The days students are not at school, they'll still have to do remote learning from home.

"We're very pleasantly surprised," said district superintendent Peter Livingston about the state decision to grant his district a waiver. "We had hopes that the state would look at us regionally in the county, the largest county in the United States, and they did."

Classrooms are being set up to make sure students are at least six feet apart, and dividers, also known as "sneeze guards" will be set up at each desk.

The lunch area at Lucerne Valley Elementary School has a normal capacity of 160 people, but as part of their waiver they're only allowed to use 25% of total capacity. Principal Ricky Anderson said that means they'll be able to fit about four classes of students into the lunch area at a time, which also means they have to add more lunch periods to accommodate all of the students.

"Lunches will be grab-and-go so they will be easier access," said Anderson. "There will also be no salad bar."

For recess, the district superintendent acknowledges that keeping students six feet apart from each other will be difficult.

"That will be a challenge," said Livingston. "If it's two classes, they would be in two different areas of the playground with different people watching them."

Livingston said extra staff members from the high school - that is still closed - will be brought in to watch students during recess. And staff members will be cleaning all of the playground equipment before and after students use it.

"We're taking as many safety precautions as we can and watching the guidance that comes out from the state and the county to do our recesses," Livingston said.

Livingston said several parents have elected to keep their students at home and will be participating in online learning only. But allowing students to return to class will at least offer them some semblance of normal.

"It's a win-win for our entire district in my mind," he said.

For the latest news on back to school and educational resources, visit abc7.com/backtoschool.
EMBED More News Videos

Heading back-to-school will look different this year due to COVID-19. Gov. Gavin Newsom announced new rules in July ahead of the fall semester.