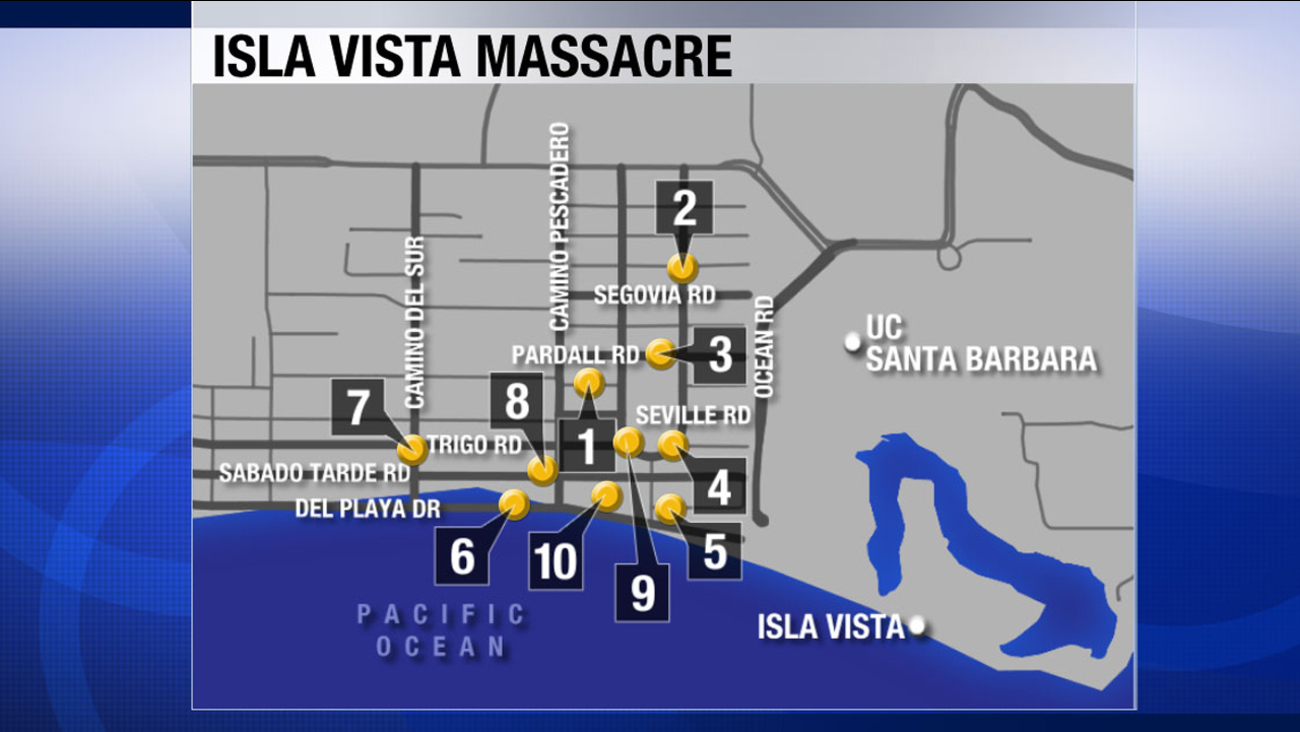 The suspect, identified as 22-year-old Elliot Rodger, killed six people and wounded 13 others Friday night in the beach town near UC Santa Barbara's campus, before taking his own life.

At a news conference Saturday, police described how Rodger spent 10 minutes traveling from one location to another and opened fire on random people after leaving a gruesome scene at his apartment.

Here's a comprehensive breakdown of the different crime locations:

Location #1: The Capri apartment complex on the 6500 block of Seville Road - The suspect, later identified as 22-year-old Elliot Rodger, murdered three people at his residence prior to the shootings. The three male victims appear to have been repeatedly stabbed.

Location #2 - Beginning of the shooting rampage: Alpha Phi sorority at Embarcadero Del Norte and Segovia Road - Several members of the Alpha Phi sorority reported hearing loud and aggressive knocking at the front door, which lasted for 1 to 2 minutes. Fortunately, no one opened the door. Shortly after, witnesses reported seeing three young women, who were standing outside in the vicinity of the sorority, shot by the suspect from across the street. Two of the women, identified as 22-year-old Katherine Cooper and 19-year-old Veronika Weiss, both members of the Tri Delta sorority at UCSB, died from their injuries.

Location #3: I.V. Deli Mart on Pardall Road - Rodger exited his vehicle, entered the delicatessen, then shot and killed 20-year-old Christopher Ross Michael-Martinez, a UCSB student. Isla Vista foot-patrol deputies heard the shooting and responded to investigate the incident. As they arrived at the scene, they saw the suspect fleeing eastbound in a black BMW. Rodger continued toward location #4 at the top of the loop.

Location #4: Top of the Embarcadero Loop - Rodger fired multiple rounds at two people who were on the sidewalk. He continued forward and turned southbound onto El Embarcadero, then turned eastbound onto Del Playa Drive to location #5.

Location #5: Del Playa Drive and El Embarcadero - The suspect brandished a handgun at a female victim. He then fired additional rounds, turned his vehicle around and started to travel westbound on Del Playa. A lone sheriff's deputy responding to the area on foot was then taken under fire by Rodger. The sheriff's deputy returned fire and the suspect drove off westbound on Del Playa and traveled to location #6.

Location #6: 6600 block of Del Playa - Rodger struck and injured a bicyclist with his vehicle. He then continued west to Camino del Sur, where he turned northbound and proceeded to the intersection of Sabado Tarde Road, which is location #7.

Location #7: Sabado Tarde Road and Camino del Sur - The suspect fired multiple shots at pedestrians in the area, hitting three people. He then traveled eastbound on Sabado Tarde to location #8.

Location #9: Little Acorn Park at the top of Embarcadero Loop - The suspect came into contact with four sheriff's deputies who were running across Little Acorn Park in response to the gunfire. As Rodger accelerated past the deputies, he fired at them. Three of the four deputies were able to return fire at the suspect, striking Rodger's BMW. It was also believed that Rodger was hit in his left hip area. The suspect drove off, turning south on El Embarcadero and proceeded to Del Playa, where he turned westbound.

Location #10: 6500 block of Del Playa - Witnesses reported Rodger accelerating his vehicle to a high rate of speed and striking another bicyclist. The victim was thrown onto the hood of the suspect's vehicle and caved in the windshield. The suspect's vehicle then collided with several parked cars and came to a stop. Responding deputies immediately removed the suspect from the car and handcuffed him. The suspect was dead from an apparent self-inflicted gunshot wound to head.

In total, seven people were killed, including the gunman, and 13 others were injured - eight from gunshot wounds, four from being hit by the suspect's car and one who suffered a minor injury whose exact cause was not clear yet.