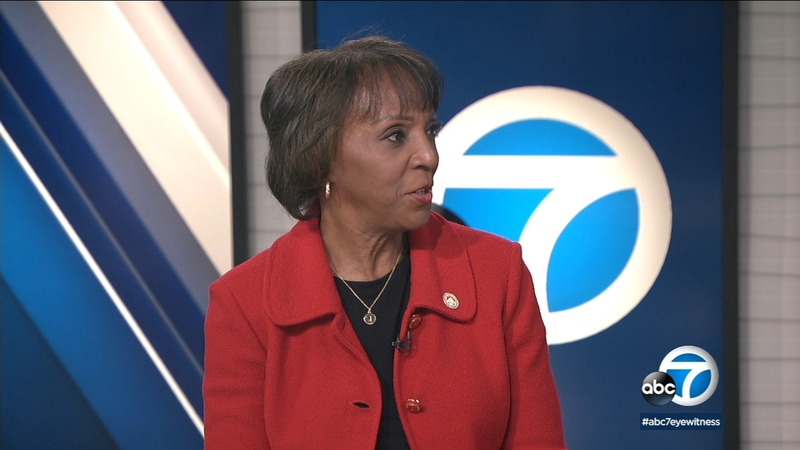 LOS ANGELES -- Los Angeles District Attorney Jackie Lacey stopped by the ABC7 newsroom to discuss some of the new laws that have gone into effect for 2019.

Let's start with California's felony murder law adjustment. It used to be that all defendants who participated in a crime, whether it's murder or robbery, could be charged with murder even if one person fired the gun.

But that's no longer the case, and the new law makes it retroactive.

So how many cases does this impact and essentially, could some still very violent criminals be released?

"The minimum amount of cases is going to be 3,300. Those are the cases that have gone to trial in this felony murder old theory. But it could be as many as 6,000 to 7,000. The interesting thing about it is that will be the prosecutor's burden to call witnesses from maybe 20 years ago - try to find them - and prove that that person was a substantial participant, that they intended to murder.

"Before if you were in for the robbery - then you were in if somebody got murdered. Now, we have to prove that everybody involved had malice. So now you'll see a lot of people released from prison."

Is there anybody specifically you're concerned about getting out under this new law?

"There's a category of people - that would be the people who are part of a gang, who went in, who said, 'hey, I didn't know we were going to use this AK-47 to kill someone.' It would be that group that I'm most concerned about because they're going to be coming back to the same neighborhoods and may be still entrenched in the gangs.

"It's a big number. I would say of the 3,300, I wouldn't be surprised if half of those, at least half of those are people who are part of a violent street gang and who will be back out."

Could this law impact the Silver Lake Trader Joe's shooting case? That suspect did not fire the gun that killed Melyda Corado - it was an officer's bullet - and the suspect has been charged with murder.

"I don't believe so because it's a provocative act murder. I don't think it would. But you never know, there's always unintended consequences with these laws. You will know soon enough because if the defense, if they're doing their job, will bring it up."

There's also a new law that makes officers' personnel files, citizen complaints and internal investigations public information. We've seen that some jurisdictions are destroying files older than five years. Why did you send a letter to Chief Michel Moore and Sheriff Alex Villanueva this week, asking them not to destroy their records?

"It's a nightmare, to be honest. It's a nightmare because police departments have been keeping records for longer than five years. Some of them - for instance, city of Inglewood was keeping them for 25 years per their policy. But they changed it just before the law came into effect. It had the unintended consequences of making it look like they were trying to destroy records that could be discoverable and helpful.

"I, on the other hand, responded as the prosecutor in this case because as soon as that story broke, the defense board contacted me and said, 'Hold up. What if they're destroying records that could be a key to somebody's innocence or could be what's called Brady material, or exculpatory, helpful material?' So I sent an email out New Year's Eve saying, 'Look, it's my advice not to destroy any records until this time that we hash it out in court.'

"Obviously, they've got to take the advice of whatever their city attorney has to say on this. I'm pretty confident that LAPD and any other agencies weren't going to destroy any of the evidence. I do feel though that the police shootings, remember, we get all of those, so we have those records.

"The one's I would be most concerned about is the ones where there was some finding of dishonesty in investigating a case. That might not come to me. That might not be something - the officer-involved shootings, the sexual assaults - those are out there. So even if they destroy records, someone else has them...so it's those records."
Report a correction or typo
Related topics:
los angeles countymurderlapdcourt caselawsinvestigation
TOP STORIES
Parents knowingly sent child with COVID to class, prompting quarantine
Pedestrian killed in Harbor Gateway hit-and-run
Alleged DUI crash kills 1 in Anaheim
Rams beat Jaguars 37-7, snapping three-game losing streak
Bob Dole, longtime public servant and WWII veteran, dies
Passenger jumps out of plane taxiing at Phoenix airport
Video: Small child steals package from Fresno doorstep
Show More
Chris Cuomo accused of sexual harassment days before CNN firing
Burglars targeting Asian-American communities in Torrance, police say
Vaccine mandate: Judge denies LA firefighter union bid for injunction
Dunkin' customer surprises beloved employee with new home
New details on violent drawings reported before MI school shooting
More TOP STORIES News