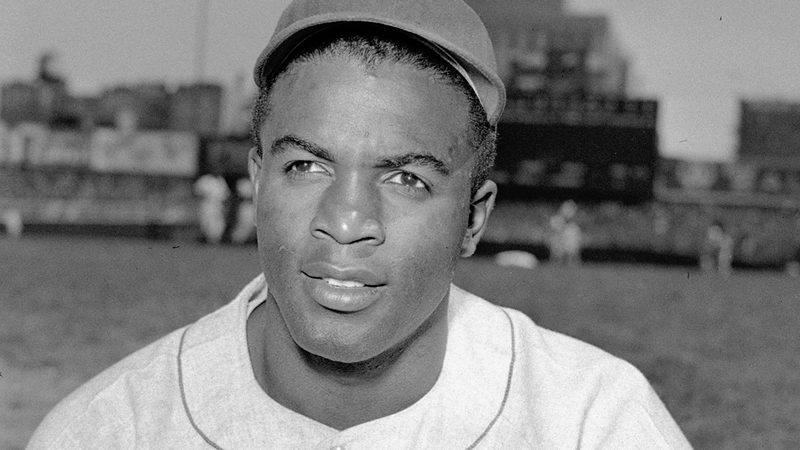 Jackie Robinson is celebrated by MLB 75 years after his debut

LOS ANGELES (KABC) -- Players across the majors donned Jackie Robinson's No. 42 - and all of them in Dodger blue this year - for the 75th anniversary of Robinson's big league debut.

The Dodgers, of course, were at home in L.A., facing the Cincinnati Reds Friday night. Robinson's son, David, spoke to the Dodgers at the base of Jackie Robinson's statue in the plaza behind the outfield bleachers before the game. Robinson's 99-year-old widow, Rachel, received several hearty ovations during a pregame ceremony.

The first 40,000 fans to arrive at the game received a Dodgers jersey with Robinson's No. 42 on the back and a commemorative 75th anniversary patch on the left sleeve.

Earlier in the day, David Robinson read the book "I Am Jackie Robinson" at Longfellow Elementary School in Pasadena, where Robinson grew up. He was joined by Robinson's granddaughter, Ayo, pitcher David Price and Players Alliance founders Curtis Granderson and Edwin Jackson.

The Dodgers and MLB celebrated the 75th anniversary of the day Jackie Robinson broke the major league color barrier on Friday with an appreciation of his trailblazing life and an evaluation of how much farther the sport still must go.

Outfielder Mookie Betts joined the Robinson family at nearby John Muir High for the unveiling of a mural of Robinson. He starred in football, basketball, baseball and track at the Pasadena school in the 1930s.

The Dodgers' powerful lineup exploded for six runs in the eighth inning and Los Angeles beat the Cincinnati Reds 9-3 in their home opener Thursday night.

Robinson was a star from the moment he stepped on the field, excelling despite an environment of hatred and abuse from other players and fans.

Baseball retired Robinson's No. 42 leaguewide in 1997, and in 2004 established Jackie Robinson Day, on which the league would honor his memory on the anniversary of his April 15, 1947, debut.

"Robinson spent his later life weaving his impact into other areas of American life," ESPN writer and former player Doug Glanville wrote. "He had no intention of stopping progress at first base, and his post-baseball efforts became an extension of his Hall of Fame career, hitting the conscience of the board room, the political elite and the institutions of power, including MLB."