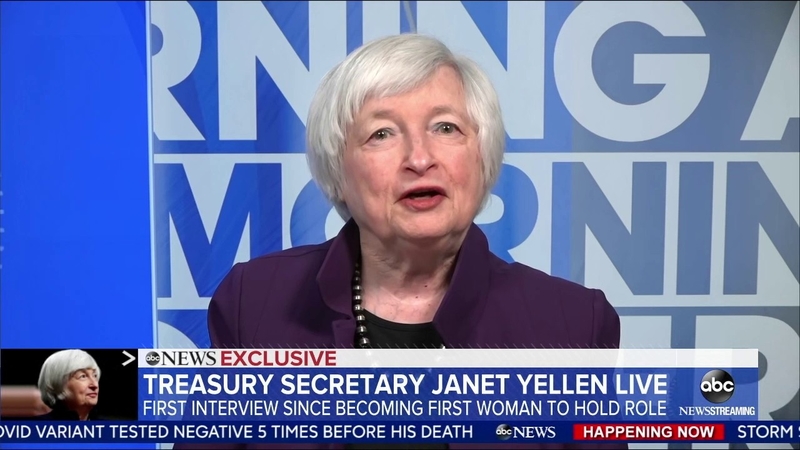 WASHINGTON -- When asked about her legacy as the first woman to serve as U.S. Treasury secretary, Janet Yellen spoke not about her own place in history, but about lifting up American families, especially those who are disadvantaged.

"It's estimated that [President Joe Biden's COVID-19 relief] package could reduce child poverty by 50%, and I want to make sure that this package gets into law and that we build back better and address long-term problems in the labor market and issues of structural racism, so I would feel if I can make a contribution to that, I would feel that that's a great legacy for me and for the country," Yellen told "Good Morning America" anchor Robin Roberts Thursday in her first television interview since her confirmation.

Vice President Kamala Harris, the first woman elected as the nation's second-in-command, swore in Yellen as the 78th Treasury secretary last week. The 74-year-old Yellen spent over a quarter-century in other top economic jobs, including as the first woman to serve as chair of the Federal Reserve from 2014 to 2018 under former president Barrack Obama.

The Treasury secretary spent her first days on the job laser-focused on Biden's $1.9 trillion COVID-19 relief plan, which she says must pass as soon as possible.

"Seeing long lines of people waiting to get food around the country is something we should never see in the United States. Too many people have to worry about whether they'll have a roof over their heads, and [Biden] wants to address that. This is really an urgent need, and we need to act big," she said.

Yellen said she would be meeting today with representatives from the Securities and Exchange Commission, the Commodities Future Trading Corporation, and the Federal Reserve to discuss GameStop, and look into whether more regulatory action is needed.

"We really need to make sure that our financial markets are functioning properly, efficiently and that investors are protected and we're going to discuss these recent events and discuss whether or not that the recent events warrant further action," she said.

When Robin pushed Yellen to confirm whether steps would be taken, Yellen said only that she and other financial leaders need to "understand deeply what happened" before making any moves.