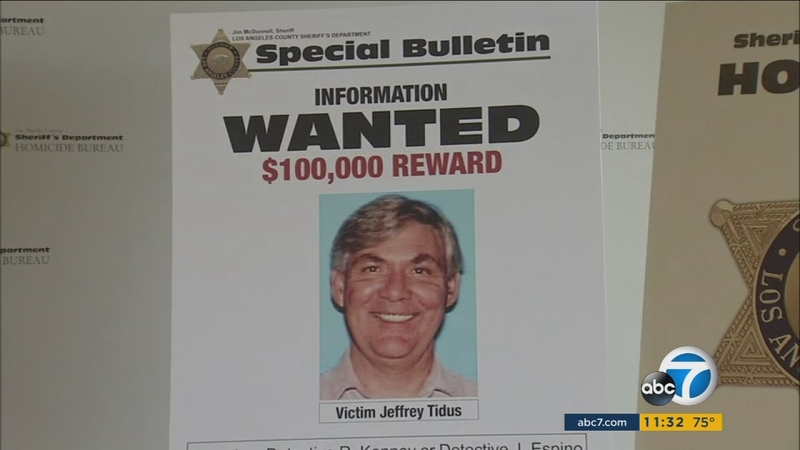 MONTEREY PARK, Calif. (KABC) -- Investigators announced a $100,000 reward as well as new leads in the execution-style murder of a prominent lawyer. The case has remained unsolved for more than seven years.

Jeffrey Tidus was killed outside his Rolling Hills Estates home on Dec. 7, 2009. He was shot in the head when he went out to his car to get his laptop after returning home from a fundraiser.

The 53-year-old died at a hospital the next day.

Loved ones said they hope the reward will help lead to the killer. The reward is for information that leads to an arrest and conviction in the brutal murder.

Sheriff's homicide detectives said they've received new information over the last few months that has shed some new light on the case.

"Our focus now has been on the professional side of his business, of his life, and we feel that his murder is related," said Lt. Victor Lewandowski. "It is our belief that there are people that are out there who know about this murder and who know the identity of the suspect or suspects."

His family members say they're not giving up hope.

"Somebody has to know something," the victim's wife, Cheryl Tidus, said. "We deserve answers. We deserve to know what went on and why."

She said this Saturday would have been the couple's 33rd wedding anniversary.

"He was a husband, he was a dad, a son, brother, uncle, a really good friend," she said.

Investigators hope that reminding the public about the case will help nudge someone forward.

"Seemingly insignificant information could be the tip or the lead that breaks this case open," Lewandowski said.

His family members are still pleading for answers.