Joe Biden's announcement on his pick for vice president is especially exciting for many California Democrats, with two of the presidential nominee's picks from the Golden State.
KABC
By Rachel Brown 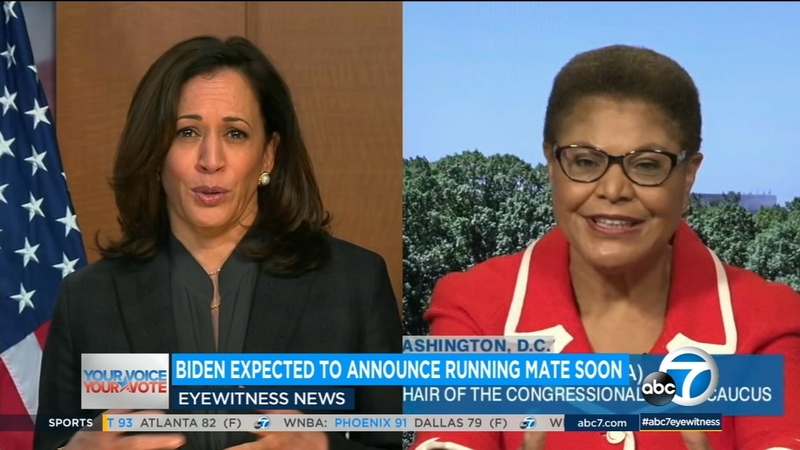 Joe Biden's announcement on his pick for vice president, which may be announced as early as Tuesday, is especially exciting for many California Democrats, with two of the presidential nominee's picks from the Golden State.

The New York Times reports the former vice president has interviewed all finalists on his short list of candidates, and a four-member team tasked with vetting potential running mates has completed its work.

He's already committed to selecting a woman and is considering several Black women.

Biden's campaign has refused to comment on his search, but his team has been in recent contact with a small group of finalists that includes at least four women of color: California Sen. Kamala Harris, California Rep. Karen Bass, former national security adviser Susan Rice and Illinois Sen. Tammy Duckworth.

But it's not certain he will do so. Last weekend, he met privately with Michigan Gov. Gretchen Whitmer, who's white. Biden has said publicly she remains on his short list. Massachusetts Sen. Elizabeth Warren, who also is white, has also been a leading contender.

Sources close to Biden's team say the announcement will be made this week, ahead of the Democratic National Convention on Aug. 17. The Democratic Party will formally nominate Biden and his vice presidential pick, with the presumptive presidential nominee virtually attending from Delaware.

For all the secrecy and speculation that typically surrounds the search for a vice presidential candidate, the decision rarely sways an election. But this year could be different.

At a minimum, the decision will shift the force of the campaign - at least temporarily - away from Donald Trump's turbulent presidency onto Biden himself. That's not a place many Democrats are comfortable given Biden's proclivity for gaffes and the persistent lack of excitement behind his candidacy.

More fundamentally, the choice offers Biden an unusual opportunity to unify a party still reeling from Trump's 2016 win and solidify its future.

Since the 77-year-old Biden has not committed to seeking a second term, his running mate could be strongly positioned to become the Democratic Party's presidential nominee in 2024 and shape national politics for the next decade.

Rep. Karen Bass, D-Los Angeles, is touting her qualifications to be chosen as Joe Biden's running mate on the Democratic ticket.

While Biden has said a top priority is selecting someone who could step into the presidency on Day One, the politics of the moment have pushed him to the brink of making history. He could become the first presidential nominee of a major party to select a woman of color. While he promised months ago to pick a woman, the nation's reckoning with systemic racism has added pressure to pick a Black woman.

Some vice presidential finalists were instructed late last week not to leave Washington, an indication that more in-person interviews, or an actual announcement, was imminent.

Within the party, there is some tension about how soon before the Democratic National Convention that Biden should unveil his decision. While finalists and their allies believe the process has already gone on too long, experienced Democratic operatives want Biden to wait as long as possible before the convention's start date to limit the vice presidential nominee's exposure to the attacks expected no matter whom he picks.

Most of the women don't have strong ties to a specific battleground state that might offer Democrats a geographic advantage this fall, which would represent a break from precedent to some extent. But Biden allies hope the historic nature of his pick might help energize two key Democratic constituencies: women and people of color.

Inside the campaign, some are privately skeptical that even a history-making pick would have a significant impact. There is a strong belief that after only a brief focus on Biden's running mate, the election would quickly return to being a referendum on Trump's presidency, which may be all the motivation Democrats need to drive massive turnout in November.

Yet Biden risks a real backlash from his base if he doesn't pick a woman of color, according to some activists.

"It would be a reckless choice to pick a white running mate with a party that's as dependent on black and brown voters as it is," said Aimee Allison of She the People, a political advocacy network for women of color. "A Black woman as VP is a healing link that our country needs right now to navigate this historic moment."

Running mates are rarely a deciding factor in presidential elections.

Kaine may have given Clinton a modest bump in his home state four years ago, but he did not prevent white men from abandoning Democrats in droves elsewhere. Republican nominee Mitt Romney picked Wisconsin native Paul Ryan in 2012 but lost Ryan's home state by nearly 7 percentage points. Trump, a New York native, won Wisconsin four years later running alongside Mike Pence, who was an unpopular governor in Indiana.

Some historians argue that adding Lyndon Johnson to the ticket helped John F. Kennedy win Texas in 1960 and capture the White House.

John McCain's 2008 selection of Alaska Gov. Sarah Palin might be the most recent example of a running mate swaying an election. In that case, she had a negative impact when she appeared unfamiliar with world affairs and unprepared for the presidency. But those involved in the decision argue that larger forces were at work that year and that McCain's loss wasn't just because of Palin.

"There was a lot of fury and chaos inside the campaign that resulted from it, but all of the electoral studies of voting behavior demonstrated there was really no electoral impact with (Palin) on the ticket," said former McCain campaign adviser Steve Schmidt, who attributed McCain's loss to the collapse of the nation's economy and voters' desire for change after the George W. Bush presidency.

"In retrospect, it was obviously a terrible decision," Schmidt said of Palin, "but people vote for the top of the ticket."

Former Wisconsin Gov. Scott Walker, a Republican who was deeply involved in Ryan's vice presidential preparations in 2012, said the main objective of picking a running mate is to find someone who may complement the presidential nominee. But above all, the person should do no harm.

The Trump campaign is eagerly awaiting Biden's announcement and the attention it will almost certainly divert from the Republican president's struggle to control the coronavirus pandemic, revive the economy and unify the nation. Given Biden's advanced age, Trump campaign spokesman Tim Murtaugh predicted that his pick would be far more significant than those of past nominees.

"Who he picks as VP could be seen as a sort of a living will for him politically," Murtaugh said of Biden, who is three years older than Trump.

He declined to offer any specific criticism of the finalists when asked. "It doesn't matter to us who he picks," he said, "because whoever it is will provide opportunities for us."