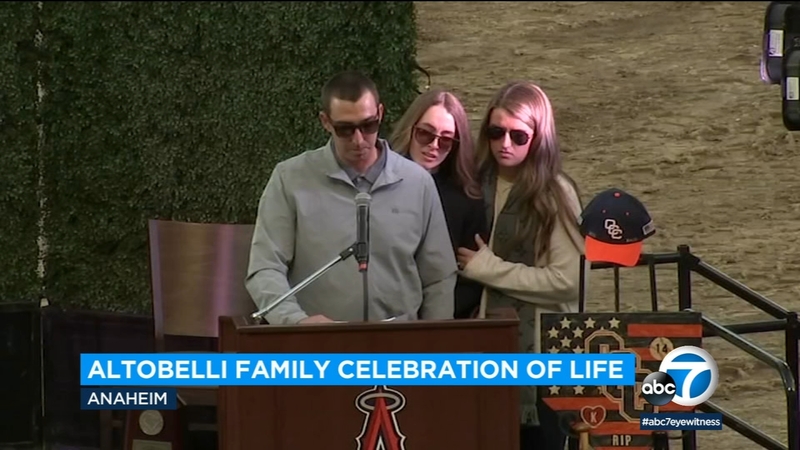 ANAHEIM, Calif. (KABC) -- Loved ones and the community gathered at Angel Stadium Monday to remember the lives of three family members who died in the helicopter crash that killed Kobe Bryant.

The memorial for John Altobelli, 56, his wife Keri, 46, and daughter Alyssa, 14, was open to the public. Friends and family spoke and a video tribute was played.

The three perished when the helicopter they were on crashed in Calabasas just over two weeks ago. Nine people, including Bryant and his 13-year-old daughter Gianna, were killed.

"The amount of love and support we've received these past few weeks has been truly amazing," said J.J. Altobelli, the son of John and Keri and brother of Alyssa.

Friends and family gathered in Newport Beach to honor the memory of Alyssa Altobelli, a 14-year-old girl who died in the helicopter crash that killed nine, including Kobe Bryant his daughter Gianna.

John Altobelli was the baseball coach at Orange Coast College in Costa Mesa for 27 years, leading the team to four state titles.

"Loyalty, trust, respect, work ethic and love," said Clarke Smith, a friend of John. "Powerful words, but Alto backed them up every day."

His daughter Alyssa was a basketball teammate of Gianna Bryant.

In lieu of flowers, the family is asking for donations to help two Altobelli children who were not involved in the crash. More than $450,000 have been raised from two GoFundMe campaigns.

On Friday, the National Transportation Safety Board released a preliminary report and found no evidence of an engine failure in the helicopter crash. No cause was listed in the reported.

Also killed in the crash were pilot Ara Zobayan and Bryant friends Christina Mauser, Sarah Chester and her daughter Payton.