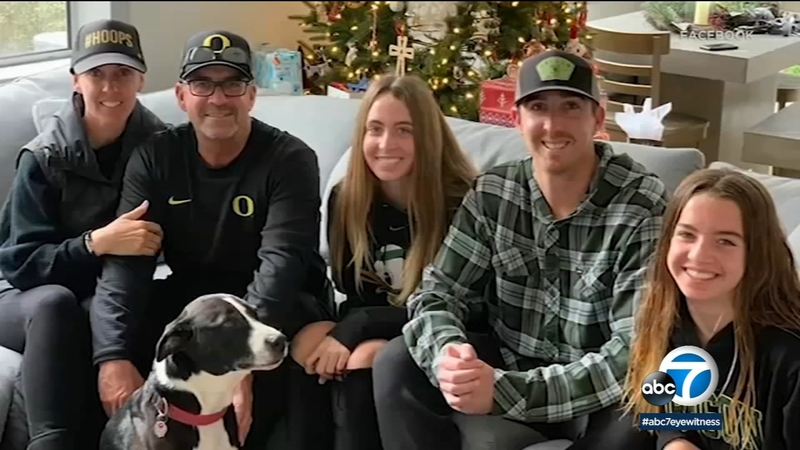 John Altobelli's brother talks about healing one year after crash

It was another heartbreaking part of the story - legendary Orange Coast College baseball coach John Altobelli, his wife Keri and their 13-year-old daughter Alyssa - all dying in the helicopter crash with Kobe Bryant.

As details have emerged in the past year, John's younger brother Tony has shut it out.

"I refuse to look at that stuff. Doesn't help me, doesn't bring my brother back. I don't want to know. And I know there's things out there are pretty graphic and pretty gnarly so I don't want anything to do with that," said Tony Altobelli.

Tony has played the role of family spokesperson, while also being the official spokesperson of OCC's athletic program, handling interviews on the baseball field the day it happened and even serving as the emcee of the team's season opener two days later, when they paid tribute to John and the family.

He says the past year has made him numb, especially with the pandemic preventing him, their family and the baseball program from being able to properly grieve.

A public memorial service was held at Angel Stadium Monday for three family members who died in the helicopter crash that killed Kobe Bryant.

"We could have had a season of baseball just to get through with what happened with John. You know, we needed a season to kind of drain the abscess a little bit and we didn't get that," he said.

He's also disappointed they can't hold an event to honor the family on this anniversary. At the same time, he's grateful John's name will never be forgotten because of who he was with.

"Would we be having this conversation if Kobe Bryant wasn't part of that? And the answer is no. No disrespect that's just how it would have been," he said. "Having Kobe as part of this thing, has helped keep my brother's legacy going you know and that's how I look at it."

Coach Nate Johnson has also done everything in his power to keep John's legacy alive.

"Kobe was part of this crash, but I wanted to make sure that he didn't get overshined by Kobe. He deserved just as much attention as Kobe did and luckily we were able to get a good amount of attention and let people know how great of a person he and Kay and Alyssa, just that family is and what they've done for OCC," Johnson said.

Johnson has taken over as head coach of the college's baseball program, doing his best to support the team as he himself tries to heal. What gets him is thinking about the surviving children, JJ and Lexi as well as other families that have now spent a whole year without their loved ones.

"I get to have Christmas with my family, but like JJ and Lexi and like Toad and the Bryants and everybody else. I mean that's not fun to think about that, you know. That's hard," he cried.

It is a perspective that has him holding his loved ones tight.

"Enjoy everyday with the family you got, you know, cause obviously that's the toughest part right now, like some people don't want to see their family cause they're scared and what not, but shoot, I've seen mine, cause if something crazy happened tomorrow, I'd want to make sure I saw them the day before," he said.