"When COVID hit, all his races were shut down and he did not want to just stay sitting down on the sideline," said his father.
KABC
By Tony Cabrera 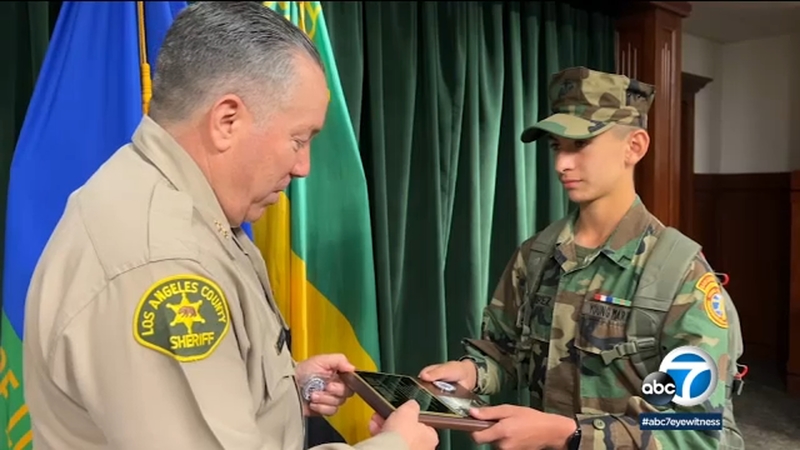 But when the COVID-19 pandemic set in, Jordan Ramirez turned his sights a little closer to home by walking to honor more than 200 police and fire departments.

"When COVID hit, all his races were shut down and he did not want to just stay sitting down on the sideline," said his father, Dimas Ramirez.

Jordan said he's made it a mission to give thanks to first responders and military members through what he calls, "Thank you for your service" walks.

"It is an appreciation walk for first responders and I give them a 'Thank you for your service' plaque on each stop," said the 12-year-old from La Puente. In the past, he's stopped at a number of law enforcement agencies in one day, walking several miles in between.

His most recent stop was at the Los Angeles County Sheriff's Department to meet Sheriff Alex Villanueva.

"It really is heartwarming, Jordan going out there and honoring all those first responders," said Villanueva. "Law enforcement, military, and all the hikes, marches. He's been all over the country. That's something special for a kid, I mean he's only 12!"

Jordan's journey started when he was just 4 years old when he ran his first 5K carrying the American flag.

"We thought it was just going to be a phase, and ever since that moment, it just kept going and going," said Dimas.

Three years ago, this passion helped him break that record.

"I've been running since I was four years old, and I broke a world record by doing seven marathons in seven continents by the age of 10," Jordan said proudly. "I do feel excited that I get to help first responders by showing them appreciation and respect."

In a time of criticism towards law enforcement, Villanueva said this is a sigh of relief.

"There's so many people invested on tearing people down, and to see someone who's actually supporting and building people up, I think that's priceless," said Villanueva.

"Spreading good news, especially right now, these times, not just our country, but the whole planet, we could use good news," he said.