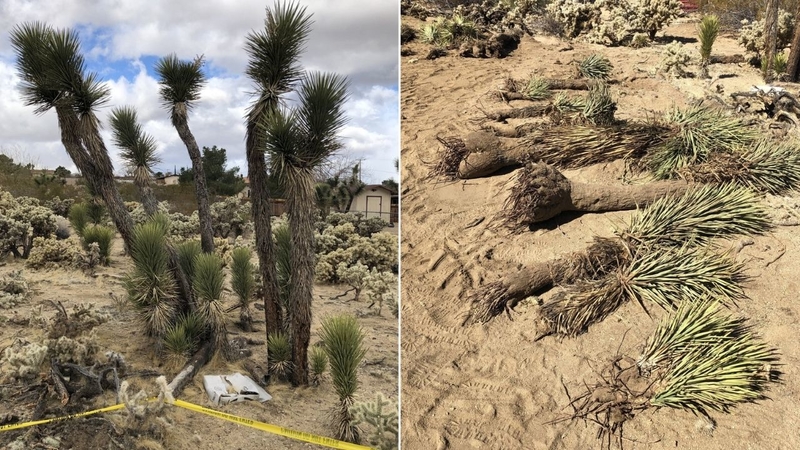 A Riverside County couple has been fined for digging up and burying dozens of protected Joshua trees to make room for a home they were building, officials said.

Jeffrey Walter and Jonetta Nordberg-Walter have been ordered to pay $18,000 as part of a diversion agreement -- the terms they must fulfill in order to have the 36 misdemeanor counts -- one for each uprooted tree -- against them dismissed.

The couple has opted not to have attorneys in the case, Supervising Deputy District Attorney Douglas Poston told CNN.

CNN was not able to find contact information for the pair. Poston told the Los Angeles Times that the couple mistakenly believed small trees could be removed.

Poston has worked in San Bernardino County District Attorney's Consumer Environmental Protection unit for about a decade, and although he's dealt with cases concerning threatened or endangered wildlife, this is his first prosecution for an offense like this involving trees, he told CNN.

It is "illegal to disturb, move, replant, remove or kill" Western Joshua trees, which are a candidate for species under California's Endangered Species Act, according to California's Department of Fish and Wildlife. The spiky desert icons, part of the agave family, are native to the Mojave Desert, can grow up to 40 feet high and can live for 150 years on average.

The property, which is about an acre in size, is about 5 miles from Joshua Tree National Park, according to Poston.

The couple can move forward with construction of a house on the property, though many protected trees remain, Poston said. As part of the diversion agreement, they will also volunteer at the national park, Poston said.

The married couple was cooperative in the investigation, though they were initially reluctant to admit fault or responsibility, Poston said.

"Most California citizens who reside in Joshua Tree habitat revere these iconic desert species, more so now than ever because of its degraded population status," said Nathaniel Arnold, deputy chief of the state wildlife department's law enforcement division.

"We're pleased to see the citizen tip led to a successful disposition and we hope it serves as a deterrent to others who may think it is acceptable to unlawfully remove Joshua Trees to make way for development," the release states.

The landowners originally faced a fine up to $4,100 and/or up to six months in jail for each count.

The pair is slated to return to court in December. If they do not comply with all terms of the diversion agreement, the San Bernardino County District Attorney plans to proceed with prosecution, the news release states.

"If you kill a Joshua Tree and if the evidence is there we will prosecute. It's a crime. You don't have to like the law, but it's the law and we take it very seriously," Poston said.
Report a correction or typo
Related topics:
riverside countynational park servicenature
TOP STORIES
TX school shooting leaves at least 19 children, 2 adults dead
Uvalde school shooting: What we know about 19 kids, 2 teachers killed
Timeline breaks down Uvalde shooter's movements day of massacre
2 Turpin siblings now have large following on TikTok
Hearing held into allegations of deputy gangs in LASD
Gun, ammo found in 2nd grader's desk at NorCal school
SoCal parents urge water safety after their toddler almost drowns
Show More
21-year-old arrested after 17 guns were found in back of U-Haul truck
Police union's new ads blast Karen Bass for missing votes in Congress
Meet the 8 candidates running against LA County Sheriff Villanueva
Walmart apologizes for selling Juneteenth ice cream
Panel discussion honors Japanese American WWII vets featured in book
More TOP STORIES News