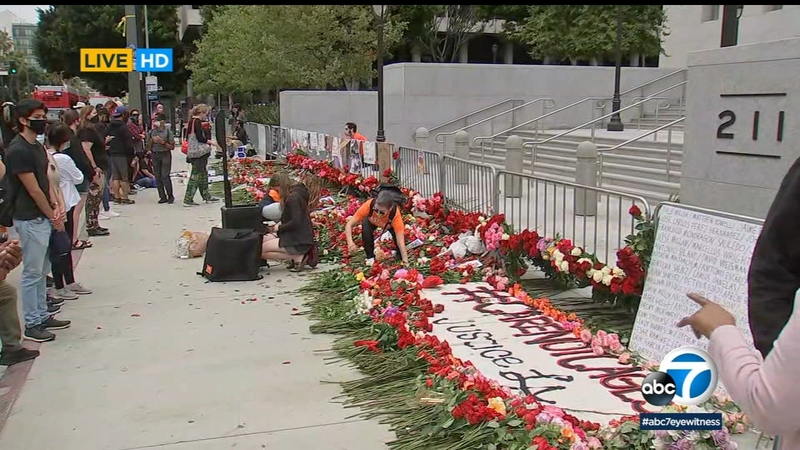 DOWNTOWN LOS ANGELES (KABC) -- Community members on Friday placed thousands of roses on the sidewalk outside the Hall of Justice in downtown Los Angeles, in what organizers described as a tribute to victims of the Los Angeles County jail system.

JusticeLA has called for the county to release more people and improve conditions at jail facilities. The activist group said the makeshift memorial was organized to draw attention to people who have been killed while in custody.

According to JusticeLA, the idea of the rose-drop was inspired by "The Rose That Grew From Concrete," a poem by the late rapper Tupac Shakur.

Organizers and participants, most of whom dropped off roses at 211 West Temple Street while remaining in their vehicles, hope Friday's "low-contact, drive-up" event helps convey the need for change.

"Black people are being murdered every day," said one woman in the passenger seat of a car, "and we want to support Black Lives Matter."

A woman in another vehicle held up a cardboard sign that read, "EVERYONE AGAINST RACISTS."

"I think this says it all," she said, adding that she was there "just to show solidarity with our African-American community. And what's happening with the police brutality right now -- it's terrible. It's important we all stand up together."
Report a correction or typo
Related topics:
societydowntown lalos angeleslos angeles countyjail deathblack lives matterlos angeles county sheriff's departmentprotestjailmemorial
Copyright © 2021 KABC-TV. All Rights Reserved.
More Videos
From CNN Newsource affiliates
TOP STORIES