Becoming his true self: Karson Coomes shares his transition journey 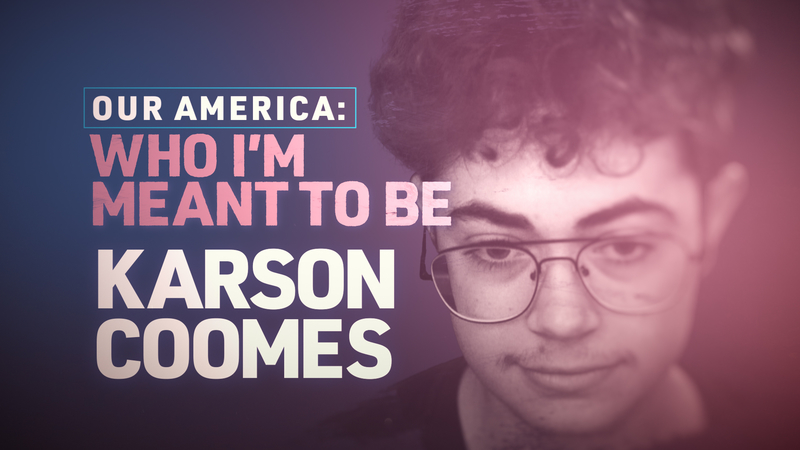 Becoming his true self: Young man shares his transition journey

Karson Coomes knows the importance of telling his own story.

"It is important for myself to tell my own story instead of someone else telling it for me because I don't want it to be misinterpreted," said the 20-year-old from Pennsylvania.

Getting the story right is paramount because it was a long journey for Coomes, who identifies as a transgender male using he/him pronouns.

"I've always felt that I was Karson. I've never really felt like a gender," he said.

In sixth grade, though, the thought began to occur to him that he may be transgender.

"I remember in middle school, I would steal my brother's boxers and I would wear them to school just so there could be a little piece of boxer [showing] when I would reach to like go get something," he said. "That's something that now thinking back then, I should have been like, 'You are transgender.'"

The thoughts of transitioning stuck with Coomes through his senior year of high school. When he knew he wanted to move forward, part of his process involved raising money to have top surgery. He raised that money by creating a uniquely designed T-shirt that simply said "human."

Coomes got support from schoolmates and teachers alike who bought the shirt.

"It was really surprising how much support I did receive," he said. "I did not think I would receive that much, and it was overwhelmingly beautiful."

Nowadays, Coomes receives a lot of support from his partner, Emmett, who is also transgender. The two just moved into a new home together. It's a step that left Coomes with a range of emotions after such a long journey to self-discovery.

Coomes hopes other young people can experience that same feeling of safety when exploring their own identities.

This Pride Month, we're celebrating members of the transgender community as a part of a special series called Our America: Who I'm Meant to Be. Click here for more stories from your city and around the country.
Report a correction or typo
Related topics:
pennsylvanialgbtq+our americalgbtq+ pridewho i'm meant to be
Copyright © 2021 KABC-TV. All Rights Reserved.
WHO I'M MEANT TO BE
Our America: Who I'm Meant to Be | Full Episode
The invisibility of Black transgender men
How COVID lockdown helped trans woman explore gender identity
Honey Mahogany: From 'RuPaul's Drag Race' to history-maker
TOP STORIES
LAUSD to require COVID-19 testing for all students, staff
Lakers to acquire Russell Westbrook, ESPN reports
Garcetti signs plan to restrict homeless camps
Video: Fight breaks out on 60 Freeway in Ontario after crash
How to convince someone to get the COVID-19 vaccine
Downtown LA venues welcoming back concert fans
Lawsuit filed by families of 9 killed in accident off San Diego coast
Show More
Scarlett Johansson sues Disney over 'Black Widow' release
Deputy shoots suspect at end of chase in Colton
New fair opens at Santa Anita Park, offering games, rides
Police: Gun, victim's wallet found in theater shooting suspect's home
Good Samaritans smash window to save driver having medical emergency
More TOP STORIES News