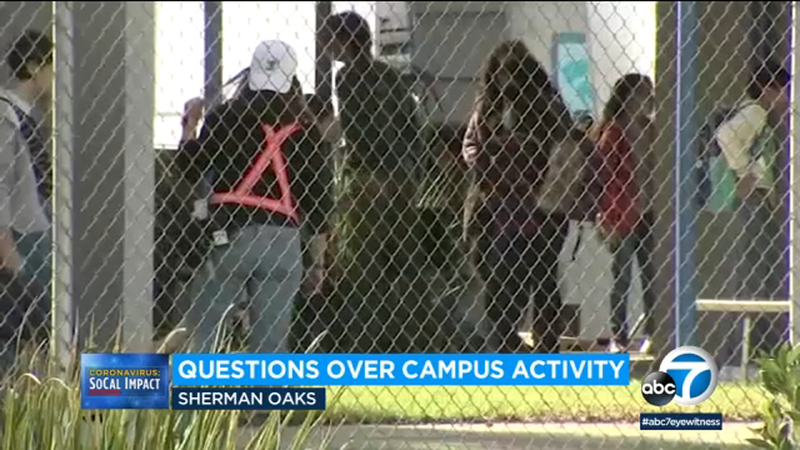 While most Southland schools remain empty during the pandemic, one elementary school is full of students -- but they're not there to attend class.

Kester Avenue Elementary School in Sherman Oaks is being used to film an Apple commercial, and the campus activity is raising a lot of questions among parents.

Even more upsetting for parents is that some of the kids were seen without masks and not physical distancing. Filming rules are different than the rules currently in place to get schools open. Productions must follow strict guidelines and have a compliance officer on set.

Still, parents can't understand why the same safety measures can't be used to get students back on campus for in-person learning.

"California has its priorities completely backwards. The fact that LAUSD says it's safe to have kids working on campus to film for Apple TV, but they can't have the highest-needs kids with disabilities on campus to receive their federally mandated services and they're saying that's not safe? That makes no sense," said parent Jenny Hontz.

Hontz is the communications director for the grassroots parents organization Speak Up. She is particularly upset about special needs students, who should technically be back on campus.

In fall 2020, L.A. County decided a small number of students with extreme special needs could return to school. But the Los Angeles Unified School District put a pause of that plan during the winter surge.

Because LAUSD and the teacher's union haven't been able to reach an agreement about safety protocols, Hontz says currently there are no services being offered.

Hontz says Speak Up surveyed parents of special needs kids and not being in class can be a matter of life and death.

"About three-fourths of parents said their kids were regressing to the point of self-harm," she said. "We have parents telling us absolutely horrible stories about their kids hitting themselves, hitting their parents, screaming every time they try to sign them onto Zoom. These kids are suffering and they're not able to get an education on the screen."

The LAUSD released the following statement, in part, about the film shoot to Eyewitness News:

"Los Angeles Unified is working to bring students back to schools as soon as possible, and in the safest way possible...State rules currently allow filming at schools even though those same schools do not meet the state rules to reopen."

"I hear the concern about why you can have a film shoot with children but you can't have children at school," Ferrer said. "We are under the state guidelines. We need to get community transmission rates down then I think there will be more school communities that are reopening."

Parents like Hontz say bottom line, businesses and industries in California are getting more care and attention than students, especially those with the most extreme learning disabilities.

"They need to be on campus receiving their federally mandated services and that's not happening in L.A.," she said.