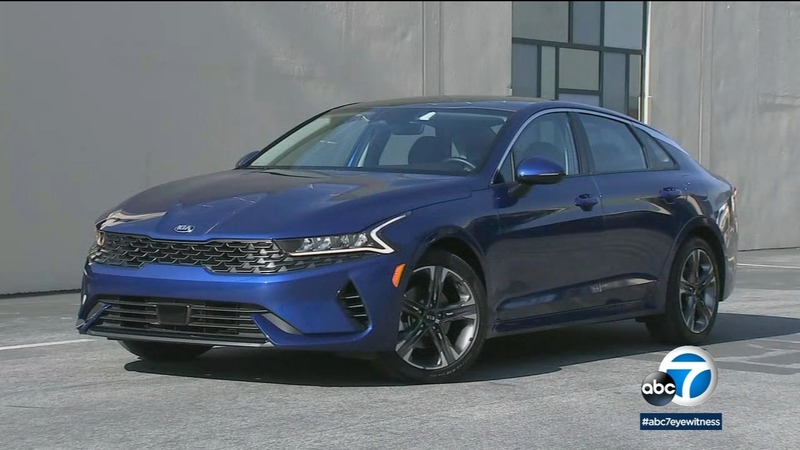 What's a K5? Well, it's the replacement for the popular Optima sedan, shifting to a different naming scheme. For 2021, the K5 is Kia's entry in the mid-size sedan segment for a base price of $23,590.

While the name may be new, the attributes of Kia's mid-size sedan remain. Lots of style for the money, a big dose of both safety and technology, and an optional turbo engine for good power, albeit with a little unwelcome noise from under the hood when you stick your foot in it. At cruising speeds it's fine

But the design is a head-turner, building on the sleek, swept-roof profile that the previous Optima used. And tons of room inside, particularly for tall drivers. Would you believe that at 6'6" tall, I actually moved the seat all the way back, but then had to move it forward a bit for a proper driving position? Now that's legroom! Many SUVs don't have that much.

The K5 is a very good sedan, but fewer people are buying sedans these days, as SUVs continue to dominate the market. So Kia, wisely, like a lot of auto companies, has also been strengthening its SUV lineup.

Also new this year is a name that is familiar, Sorento, a hallmark of Kia's SUV lineup. It's a clean-sheet redesign for this three-row crossover, with the usual compact third row for pretty much only the little ones. The new Sorento starts at $29,390.

New for 2021 is optional hybrid power for the Sorento, boasting an estimated 37 miles per gallon combined. More and more buyers are looking for a hybrid option in their SUV, and soon there will be yet another option for the Sorento: plug-in hybrid power promising 30 miles of battery-only range. That one comes along later this year.

With the Sorento's update, it can better compete in a segment that is beyond crowded, so the hybrid option should help it stand out there. You will pay more for the Sorento Hybrid. Base price is $33,500, though the model does come with lots more standard features for that higher price.