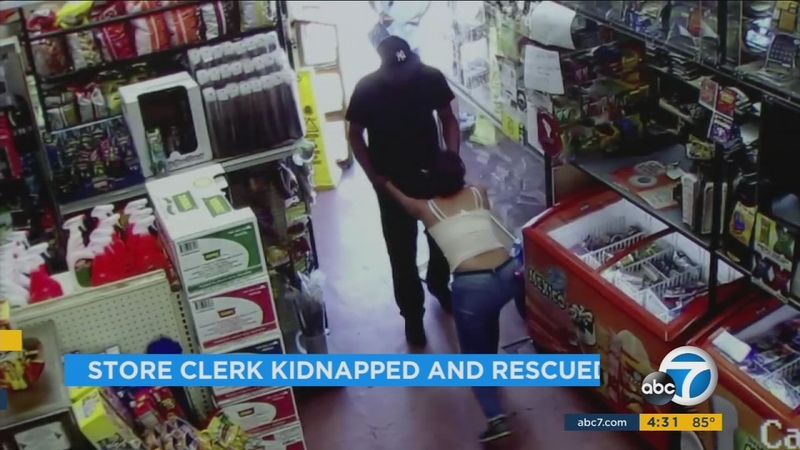 LOS ANGELES (KABC) -- Accused kidnapper Jose Caro is behind bars after allegedly kidnapping a clerk from an Exposition Park convenience store and driving her to a North Hollywood cemetery.

In surveillance video, Caro, 28, is seen dragging the resisting woman, pulling her by her hands out of Mia's Mini Market as a mailman sidesteps them and continues walking in to the store without intervening.

ABC7 caught up with that mailman on Thursday, the day after the kidnapping. Off-camera, he said he wasn't sure at that time if that was her boyfriend or if they were playing around because he didn't hear her yelling for help. He said he was shocked to later find out she had been abducted.

Police say the victim was able to trigger the store's silent alarm, but Caro had already shoved her in his Honda Civic and took off before police arrived.

The victims' sister, who doesn't want to be identified, says Caro is a customer who had been stalking her sister. She says he was armed with a hammer, a large knife and screwdrivers and told her sister he was going to bury her alive.

"There were some threats of violence, of death and violence against her family if he didn't get his way or have her be his girlfriend," said LAPD Det. Gerald Harden.

Police say Caro drove the victim to the Pierce Brothers cemetery in North Hollywood. The victim's sister says there was no door handle inside to open the car door, but her sister was able to jump out the window and get help from women who were visiting a family grave site.