KGO
SONOMA COUNTY, Calif. -- At a news conference Monday night, officials announced the Kincade Fire has spread to 74,324 acres and is 15 percent contained. Of the 123 structures destroyed, CAL FIRE says 57 are homes. Of the 20 structures damaged, officials say 12 are homes.

Earlier in the evening, CAL FIRE issued an evacuation warning for parts of Lake County due to the Kincade Fire, including Twin Pine Casino in Middletown.

Gov. Gavin Newsom says firefighters have responded to 330 fires across California in the last 24 hours.

To see if your address is evacuated, use the online, up-to-date evacuation map for Sonoma County available here. If you have any questions, officials urge you call 211.

For this Santa Rosa couple, who survived the North Bay fires two years ago, everything about the Kincade Fire is too much, especially the smell of smoke.

Joel Chandler and his wife Tina live in Santa Rosa's Larkfield Estates, where hundreds of homes burned two years ago.

They just moved in recently, only to be evacuated again. It's all too much, Tina told us. Everything about this is too much, especially the smell of smoke

"The smell," Tina said. "The smell makes me nauseous."

When asked if part of this is mental, Tina said, "It's post traumatic stress. Many of our friend have it. This is a real thing."

Joel added, "It just feels like this is out of control. The same thing keeps happening over and over again. I know people have made improvements, but this is just not working."

He adds that he never did leave his house, this time.
The big difference this time, said Joel, was time. For this, they had two days warning.

The Green family used their RV as a bulldozer to run over trees and get a convoy of 10 family members out of the red zone area of the Kincade Fire. After the 2017 fires they thought they had seen it all. But now they're back at a shelter, holding on to hope that their home is still standing.

The numbers keep on coming, now the latest 96 structures including 49 homes destroyed by the Kincade fire. Many of those residents are staying in shelters along the North Bay.

Many of the evacuees are still waiting to see if they'll be able to go back home and in, some cases, to see if in fact they still have a physical home. The Sonoma-Marin Fairgrounds shelter reached its overcapacity point couple days ago. So we drove to Petaluma where many of the evacuees where sent to.

When asked how they're doing, Santa Rosa evacuee Cricket Green said, "Tired, stressed and I want to go home but we are doing okay otherwise.."

When asked if she knows how her home's doing, she said, "I don't know anything, I just know that we can't go back now"

We met Cricket, Josh and Jacob Green outside of the fairgrounds, they were evacuated at 3 a.m. on Sunday. The flames where inching up to their home up on the hills in Santa Rosa.
"The entire horizon was just orange," Jacob said. "Like a bright orange glow and we could just watch the fire the whole night. Just waiting to get the alert"

The Green family used their RV as a bulldozer to run over trees and get a convoy of 10 family members out of the red zone area of the fire. After the 2017 fires they thought they had seen it all. But now they're back here at a shelter holding on to hope that their home is still standing
"My mom there in the tent taking care of her cats," Josh said. "My son, my wife, my other son and his girlfriend are inside right now taking a nap. Yeah that's the circus."

He went on to say, "The wind (was) knocking everything over and we just grabbed everything we could to fit in here. Into the RV and into the cars and I just used this thing as a bulldozer. Going up the hill and pushing trees, power lines that came down. While everyone tailed behind me."

While gesturing to the RV, Josh said, "This thing has saved our lives twice."

ONE OF MANY FIRES AROUND CALIFORNIA

Governor Gavin Newsom said firefighters have put out at least 330 wildfires in California in the past few days.

The latest was the Getty Fire that exploded in size early Monday morning in Los Angeles. Mayor Eric Garcetti says the wildfire in the city's western neighborhoods has scorched more than 600 acres but its growth has slowed.

Garcetti says the evacuation area has been slightly reduced after stretching from the Brentwood area to the Pacific Coast Highway in the Pacific Palisades neighborhood area early Monday. The earlier evacuation orders affected 10,000 homes and businesses.

Homes have burned since the fire erupted around 1:30 a.m. and was swept by Santa Ana winds into canyons and ridgetop neighborhoods. But there's still no exact count of how many were destroyed.

Los Angeles Fire Chief Ralph Terrazas says his firefighters had to make tough choices about which homes could be saved.

Garcetti says the cause of the fire is under investigation.

The dry offshore gusts are expected to be replaced by a return of moist ocean air in the afternoon. But Santa Ana winds are forecast to return Tuesday night.

On Sunday, Governor Gavin Newsom declared a statewide emergency due to the effects of unprecedented high-wind events which have resulted in fires and evacuations across the state.

The Tick Fire in Southern California, one of several that broke out in the greater Los Angeles region this week, has also destroyed structures, threatened homes and critical infrastructure, and caused the evacuation of tens of thousands of residents.

"We are deploying every resource available, and are coordinating with numerous agencies as we continue to respond to these fires. It is critical that people in evacuation zones heed the warnings from officials and first responders, and have the local and state resources they need as we fight these fires," said Governor Newsom, in a statement.

Dramatic images of the firefight to save the Sonoma County town of Windsor were captured on Sunday, October 27th 2019.

Northern California firefighters during the night made an aggressive effort to attack a fire burning in Sonoma County's wine country, fearing it would reach the town of Windsor. The community's 28,000 residents have been evacuated.

California Department of Forestry and Fire Protection Jonathan Cox said Monday that firefighters brought in what he called significant resources to fight the wildfire.

The fire started last week and has been fanned by extremely heavy winds.

Click here for the latest evacuation and shelter information.

Get the latest developments on the Kincade Fire here. 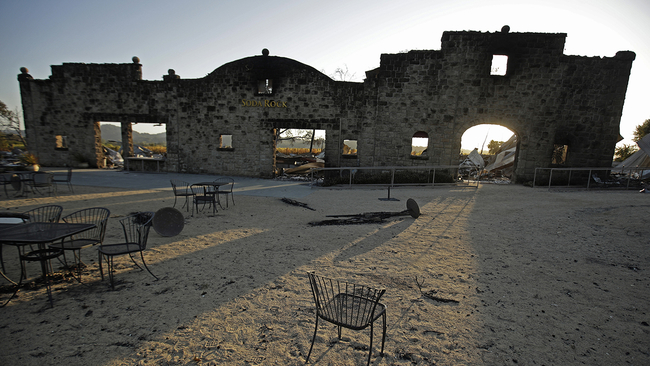